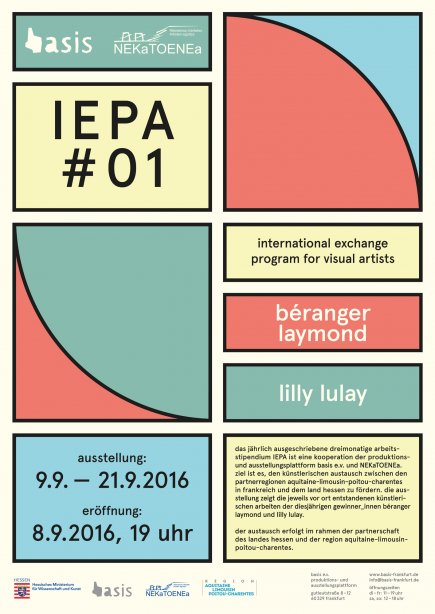 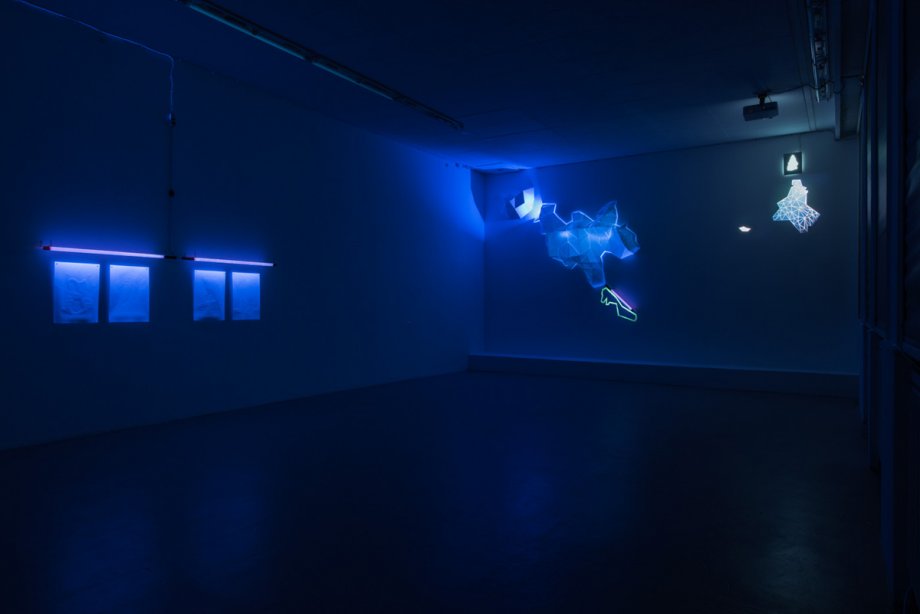 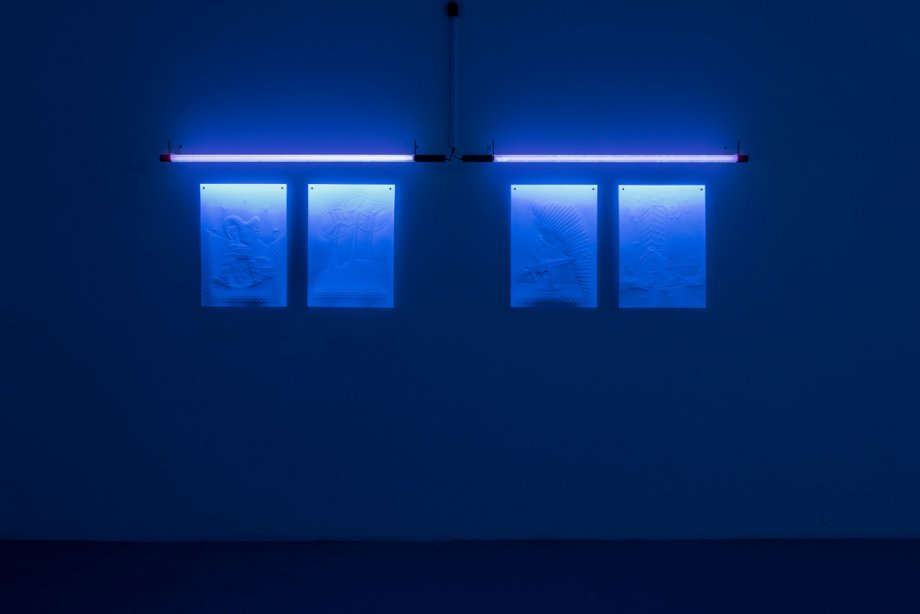 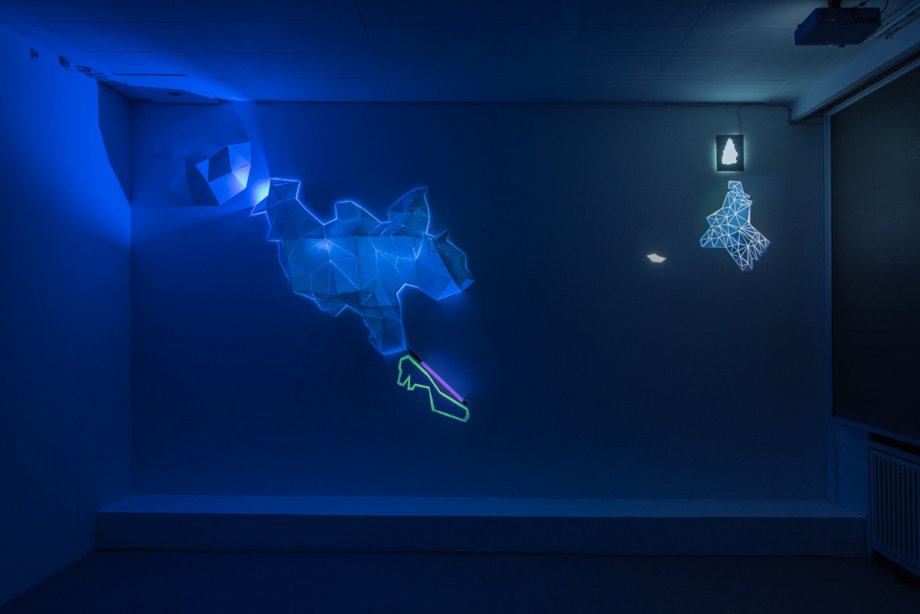 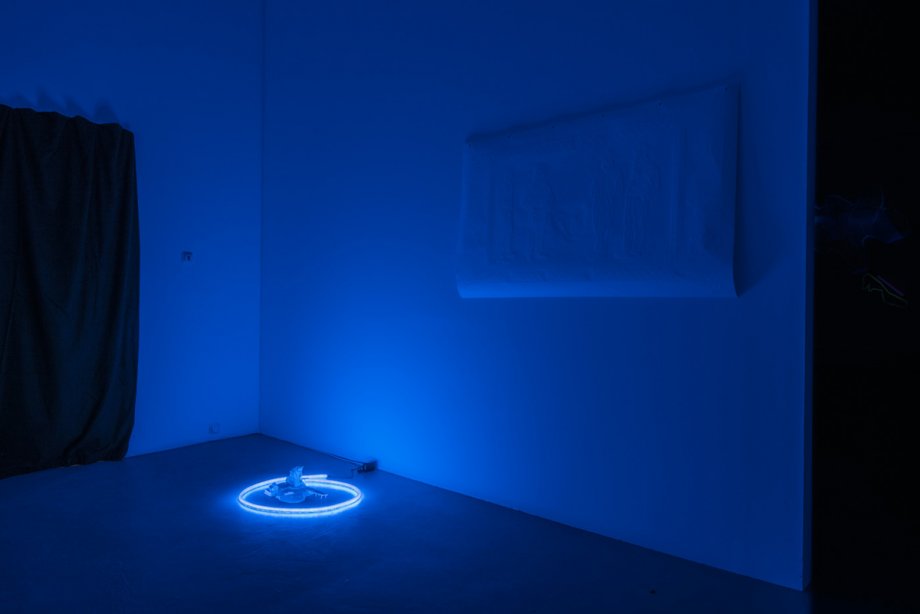 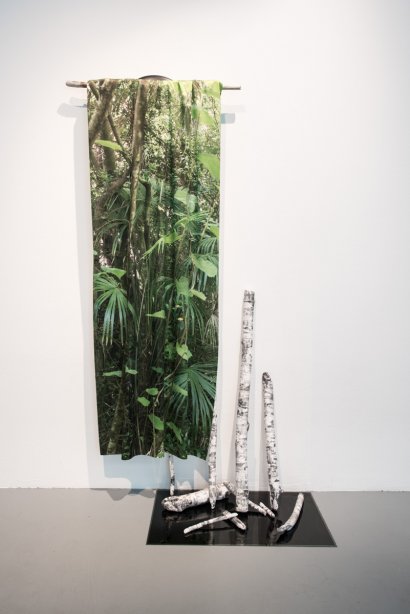 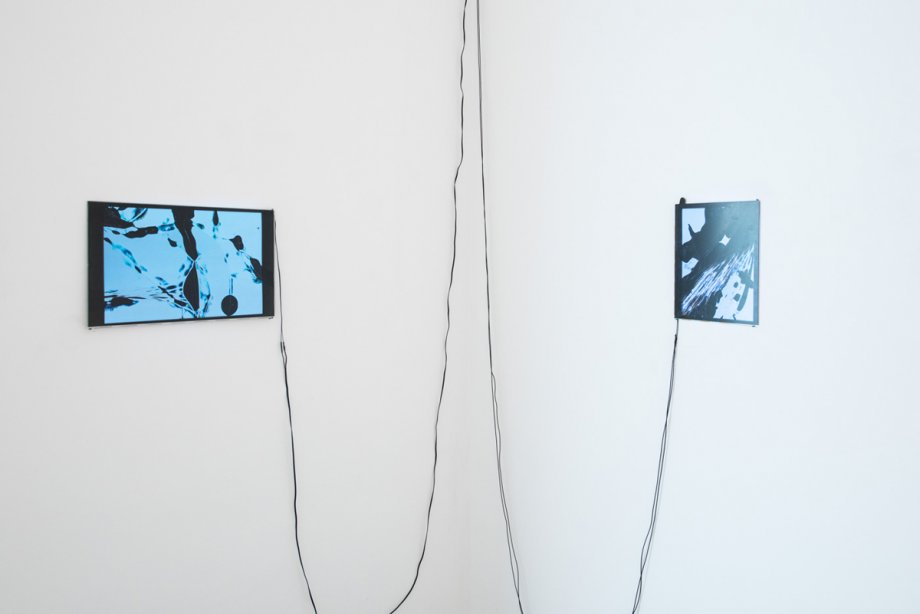 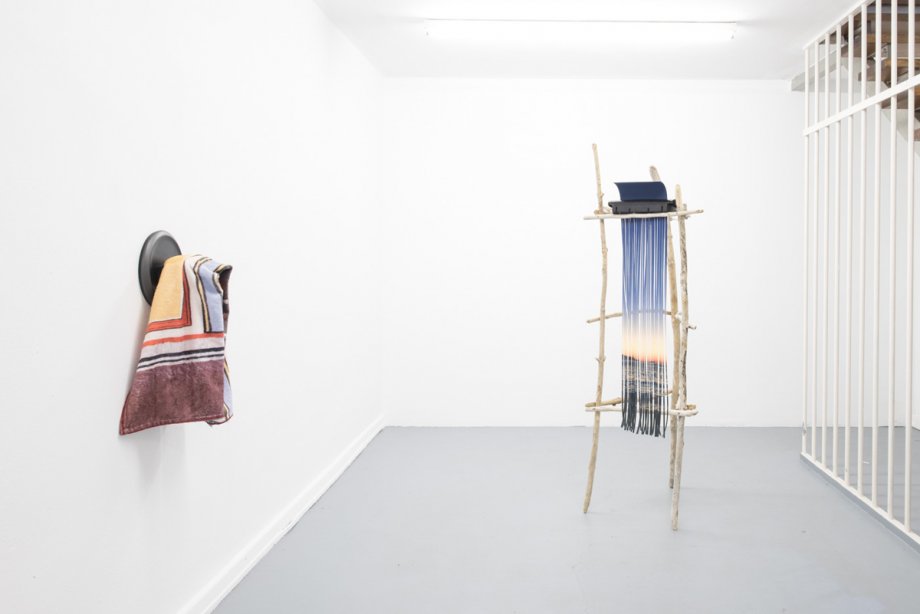 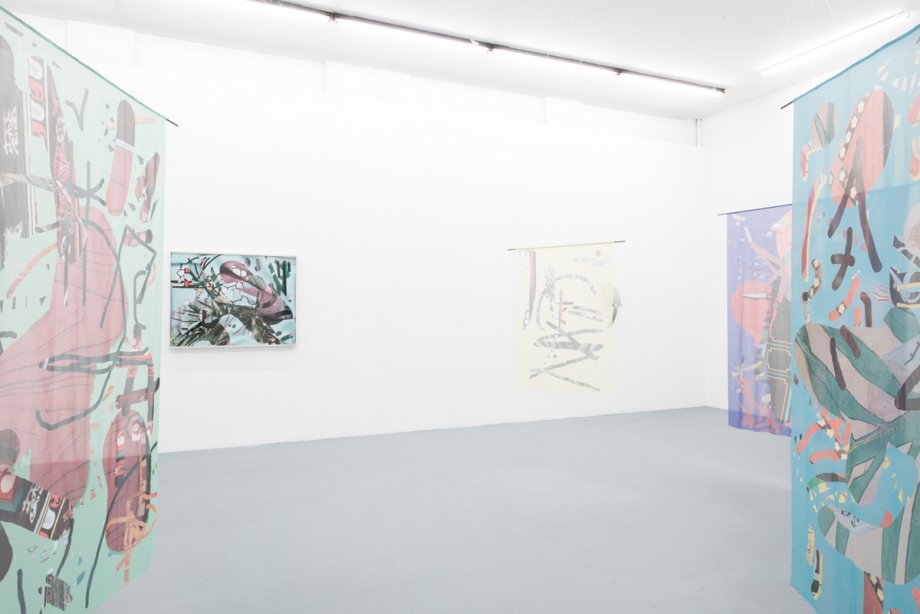 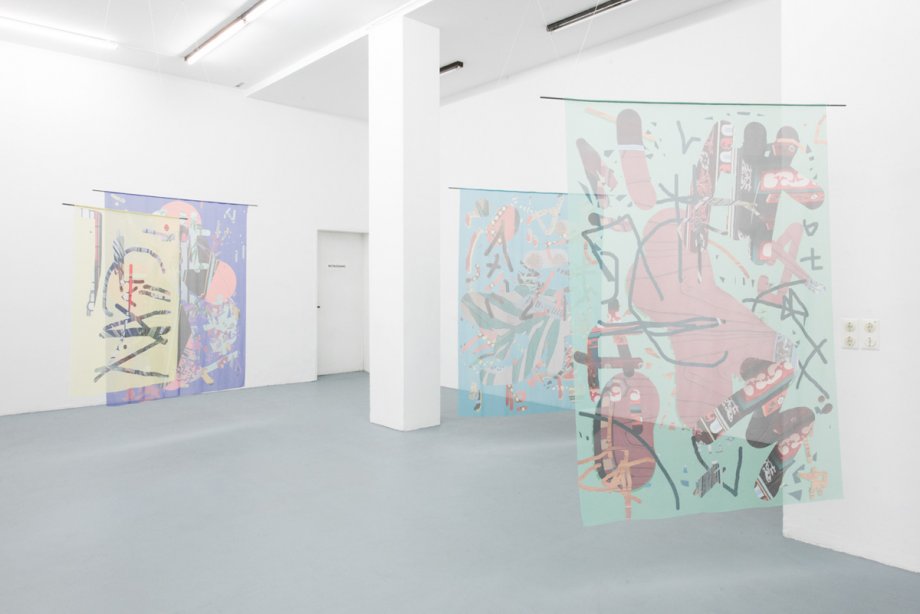 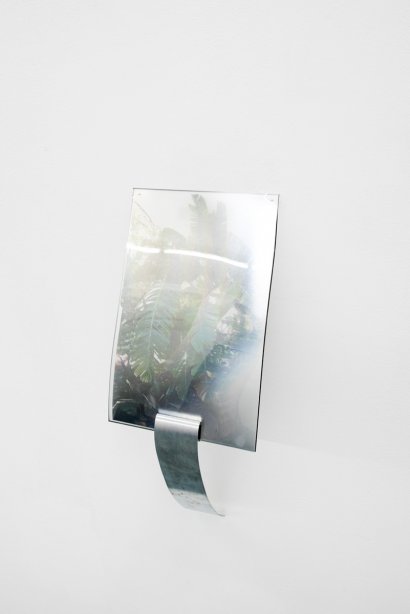 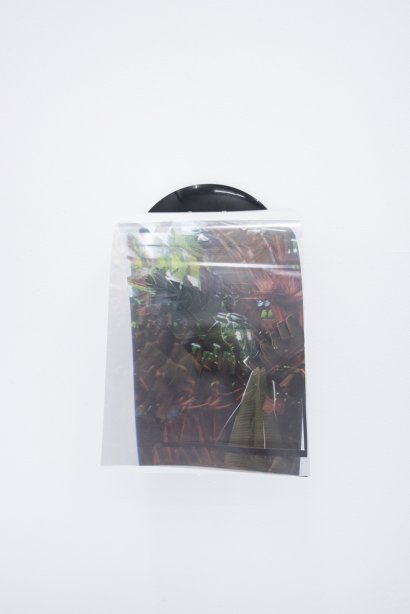 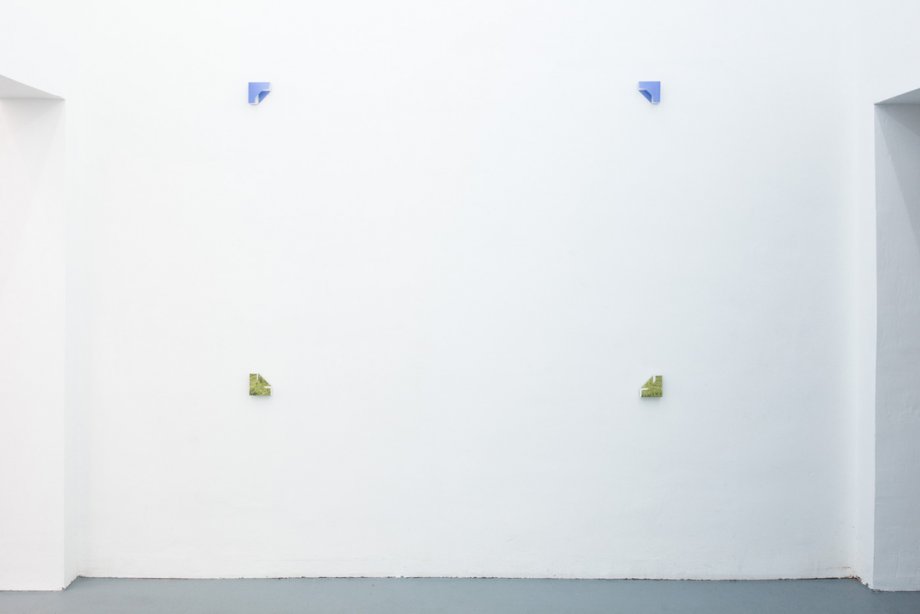 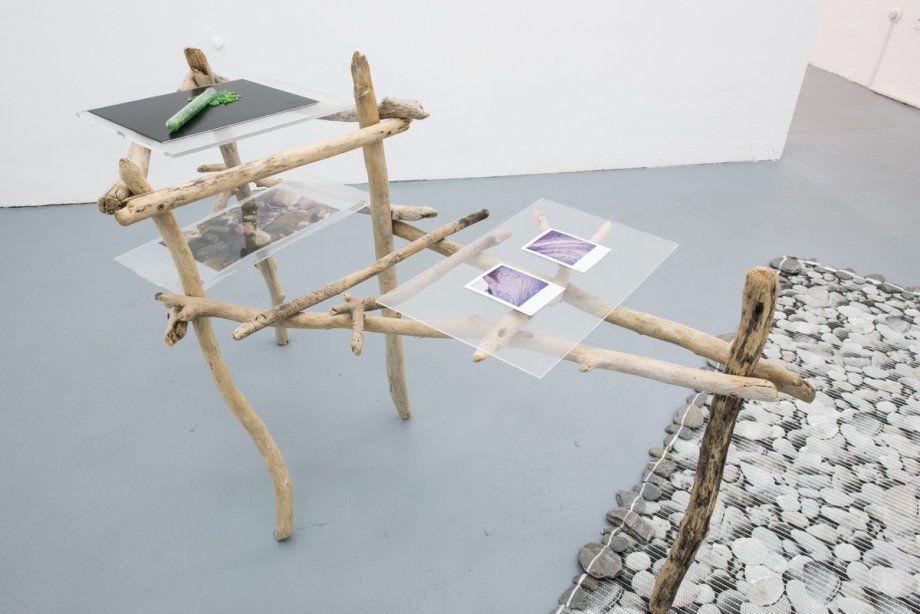 The three-month IEPA artist grant, a cooperation between the basis e.V. production & exhibition platform and NEKaTOENa, is offered annually. Its aim is to promote exchange in the field of art between the partner regions of Aquitaine-Limousin-Poitou-Charentes in France and the German Federal State of Hesse. On view in the exhibition are works produced during the residency by this year’s winners Béranger Laymond and Lilly Lulay.

Béranger Laymond created the installation “Rebirth” on view in the context of his three-month residency in Frankfurt. The utopian world Laymond has here constructed using light, objects and 3D prints is based on the St. Kilda archipelago in Scotland. With its population never exceeding 180 persons, St Kilda’s remaining inhabitants decided to leave in 1930. From that time onwards, the only persons living there year-round have been military personnel. Laymond’s installation sees the abandoned terrain revitalized. The cartographic model on the wall depicting St. Kilda’s contours and groups of islands is transformed into a surreal, glowing drawing through various light sources. New utopian ideas on how life on St. Kilda could look now and which social and economic realities it would be based around, are recorded by the artist in four embossed paper works. Alongside cultic and traditional aspects, power supply and heroism as well as economy form crucial aspects of the utopian rebirth. In a 3D print the artist embraces the idea of perfect, pleasurable living on a desert island. Yet this notion is marred by the objects found on the island, as these are props used in famous horror movies. The installation unites utopia and dystopia, history and fiction, humor and criticism; it stages the flaring up of points of light in a chimerical world that is intentionally realized as a purely fictional concept only.

Lilly Lulay has been analysing traces of human activity and the structures of the landscape shaped by erosion in the nature reserve surrounding Hendaye in France while staying there on a three-month artist residency. Lulay's installational works involve, amongst other things, photographs of the nearby coast and various finds such as driftwood and shards of glass smoothed and reshaped by nature. Formed by weather and the tides, but also interfused with traces of human appropriation, the coastal landscape provided the starting point for her artistic reflection on the interpenetration of nature and culture.

In her multilayered installations and collages she investigates the annexation and superimposition of both natural and historical places through human intervention. In doing so she employs semi-transparent and reflective foils, broken displays, photography and fabrics alongside natural finds. Lulay sees both the organic structures and the cultural patterns in our environment to be functioning as carrier and reflection of natural, cultural and temporal circumstances. In her prints on silk, neoprene and polyester Lulay combines interior and exterior views and images of the murals on walls and ceilings of close-by Château-Observatoire Abbadia with images of graffiti on abandoned bunkers still littering the landscape from the time of German occupation. The shapes of the graffiti hereby serve as templates to her composition of the views of the Château. The time-specific use of both buildings, but also the natural as well as the culturally determined superimpositions within these historical places are deconstructed and placed in new relationships with each other.

This exchange occurs in the context of the partnership between the German Federal State of Hesse and the French region of Aquitaine-Limousin-Poitou-Charentes.