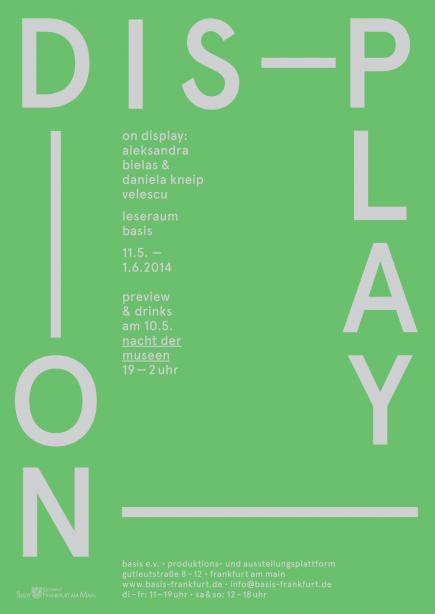 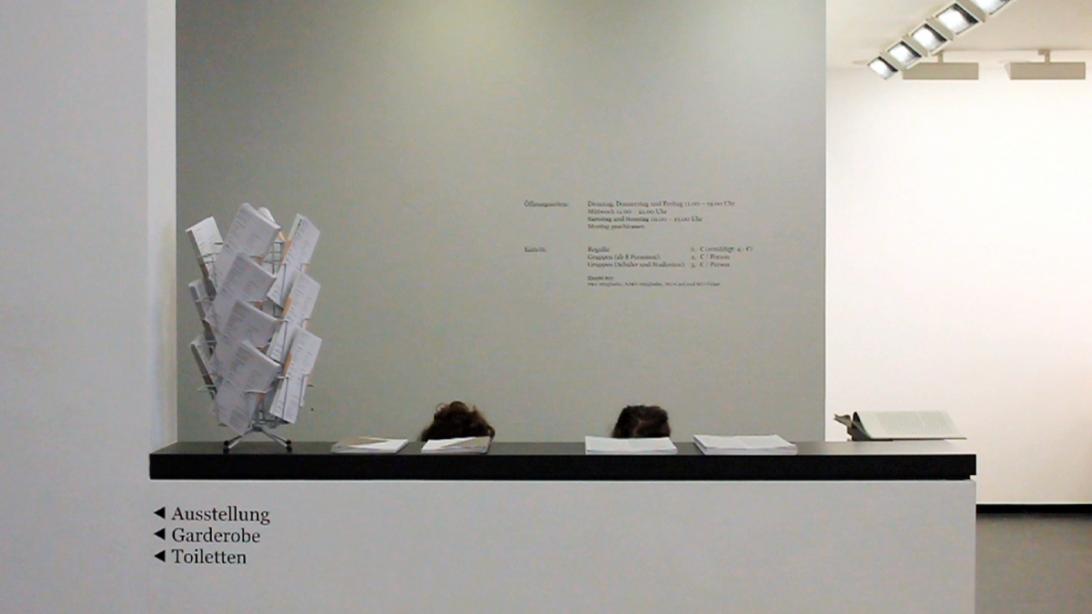 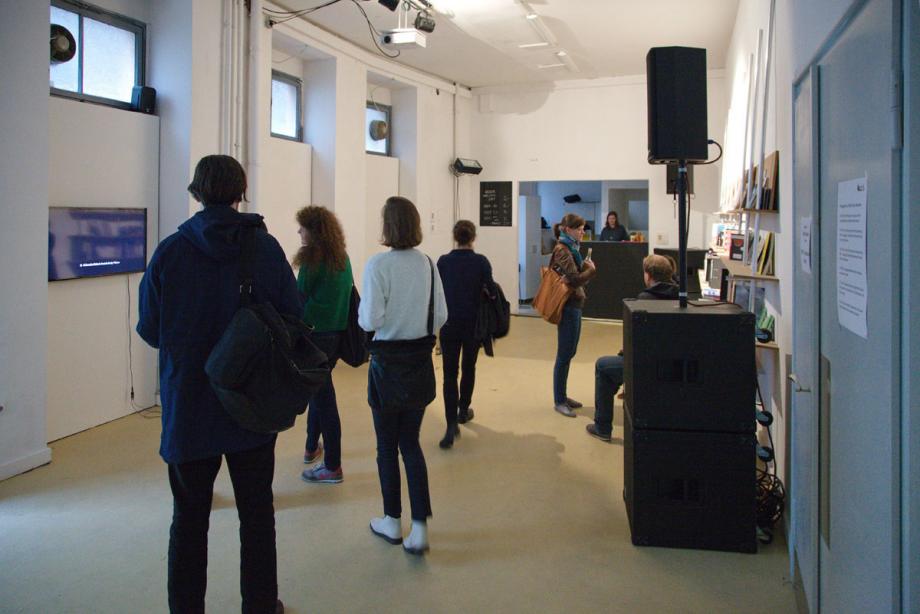 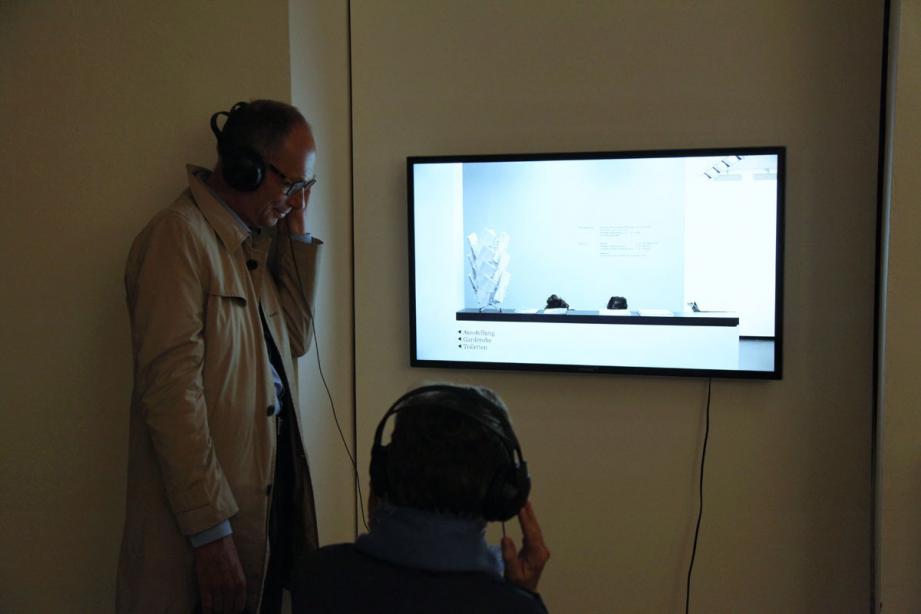 We are delighted to present the video MMJN (Future Perfect – The Future As It Will Have Been), 2013 by Aleksandra Bielas & Daniela Kneip Velescu from May 11, to June 1.
The opening will take place on May 10, from 7:00 pm till 2:00 am. - parallel to Nacht der Museen.

Who is actually sitting there when you step inside a museum or art institution? The subject of Aleksandra Bielas & Daniela Kneip Velescu’s video MMJN (Future Perfect – The Future As It Will Have Been) is the unchanging work routines, endless repetitions and patterns connected with the activities at the reception of an art institution. The choreography of MMJN (Future Perfect – The Future As It Will Have Been), the way it alternates rhythmically between simultaneous answers and the ensuing pauses when the two women return to their own work, is dictated by the experiences of its two actresses. In their unrehearsed and humorously exaggerated answer game, the artists explore the role that their job assigns them at the reception as representatives of an art institution while the artistic realization and the looped repetitions gesture at their proper role as artists that seem as if forgotten at the ticket desk.

Aleksandra Bielas (b. 1980 in Tychy, Poland) lives in Berlin.
Daniela Kneip Velescu (b. 1982 in Bukarest, Romania) lives in Frankfurt am Main.

Aleksandra Bielas and Daniela Kneip Velescu
MMJN (Future Perfect – The Future As It Will Have Been), 2013

Two women, dressed as though for a pantomimic performance, enter an environment that appears at first sight to be the front desk or reception area of an exhibition space (white walls illuminated with spots, an exhibition catalogue and several stacks of paper placed on the counter, the words “exhibition”, “cloak room” and “restrooms” mounted on the wall, and behind the counter, small lines of text that could contain information about the entrance fee--all this in the proscenium of an institutional, modernistic entrance situation). The women simultaneously start to explain something to us, gesticulating at the same time, and then stop again (almost) in sync. Once more they dedicate themselves fully to a task that we cannot really see and are not able to access, as both lower their heads and vanish almost entirely in their framing--in other words, behind the counter.
All this happens in a continuous sequence: talking, doing invisible work, drinking water and answering calls--also in sync. We are getting more and more used to the abrupt, almost simultaneous speaking and the Rohrschach test-like acting, as if we as the visitors or spectators of this situation are drunk, or in another way affected, on drugs, or simply tired and trying to hide it, until we can make some sense out of what the women are saying. But this is anyway what you see and hear right now.
What we can see and probably know, but not necessarily need to know, is the fact that both women, the authors of this video work, Aleksandra Bielas and Daniela Kneip Velescu, have worked as secretaries, cashiers, receptionists and hostesses precisely in this particular art institution (Kneip Velescu is still currently employed there). Their gestural ballet consists of filtered answers and the corresponding gestures for the most often asked (not to say most stupid) questions: Where is the MMK? (Quasi opposite.) What kind of exhibition is on show right now? (The visitor is actually already standing in it.) Where can I find information about it? (Right in front of your nose.) Where is the next ATM, the restroom? And so forth and so on.
The two protagonists alternately represent their own and externally determined work, standby- and on- modes with two attention spans of diverging qualities, a private interest (that is shielded from the public) and a professional interest (obviously acted out and practised) that is performed for us, the consumers of their boring subsistence jobs. With the sentence, “I'll put you through”, the protagonists simultaneously and convincingly end their brief phone calls, resuscitating in a precise and almost exaggerated manner the stereotype of a 1950s telephone operator out of a movie (indeed differently than in remakes such as “Mad Men” in 2007). In an equally slapstick manner the artists foreground the adverse conditions they face, thereby showing us what we may not even want to see because, for us, it is perhaps not quite artificial enough for art. They aggressively point out the hyper-banality of their miserable living conditions as “artists” (in which they are forced into other occupations instead of art) and refuse us slow-witted consumers of culture, as punishment, because we are somehow to blame for the whole situation, a view of that which is real or at least supposedly interesting: what they actually do and therefore do only for themselves.

Art and career or the desire to build a career are closely linked. Since the 1960s, we are accustomed to the lively exchange of tools between areas of art and life, and through the 1990s, attentive art viewers are acquainted with the commingling and overlapping of social issues and communicative difficulties relating to public and private spheres and especially to the market and the institution--including among other things contemplative round-the-clock lingering--also by homeless people--in exhibition spaces [1], gallery assistants who faint and babble out the press release deliriously when we are about to leave the exhibition space [2], employees (or actors that are hired to act as employees) who are devoted to inscrutable production processes [3] etc. All this, however, often concerns the lives or the adopted--not to say borrowed--lives of others, preferably people in weaker social positions. In the work of Bielas and Kneip Velescu, their own economic reality is staged first by the analysis and de-construction of the individual components of their jobs. They then, however, again collage these components together and in doing so elegantly subject their work to an emphatic hybrid-variant of an alienation effect and theatre of illusion--precisely because one’s everyday routine often appears as something abstract. We, as visitors to this performance, are accepted merely as troublemakers.

There is also an older version of this video entitled “MMJN (Endless Longing, Eternal Return)” (2011) which is technically simpler, but more synchronized in the performance than this one (maybe because both actors at that time worked as receptionists day in and day out). The artists also intend to perform this work for the camera every two years (no matter what they happen to be doing in real life at the time) and to repeatedly perform and record the performance on video as if it were a gymnastic exercise that with progressing years one attempts in order to see if one is still able to do it or to see how far one has possibly already moved away from a former ideal.

on display is curated by gislind köhler.