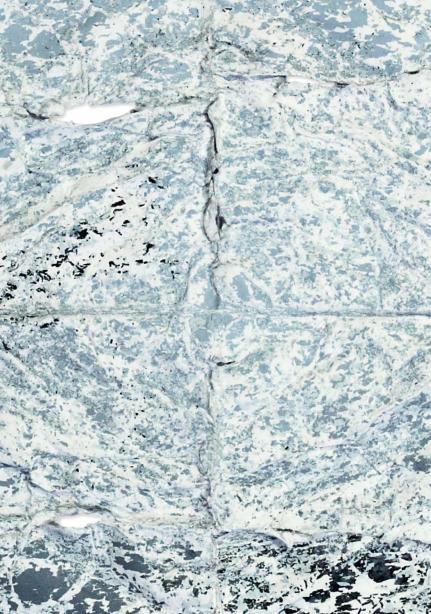 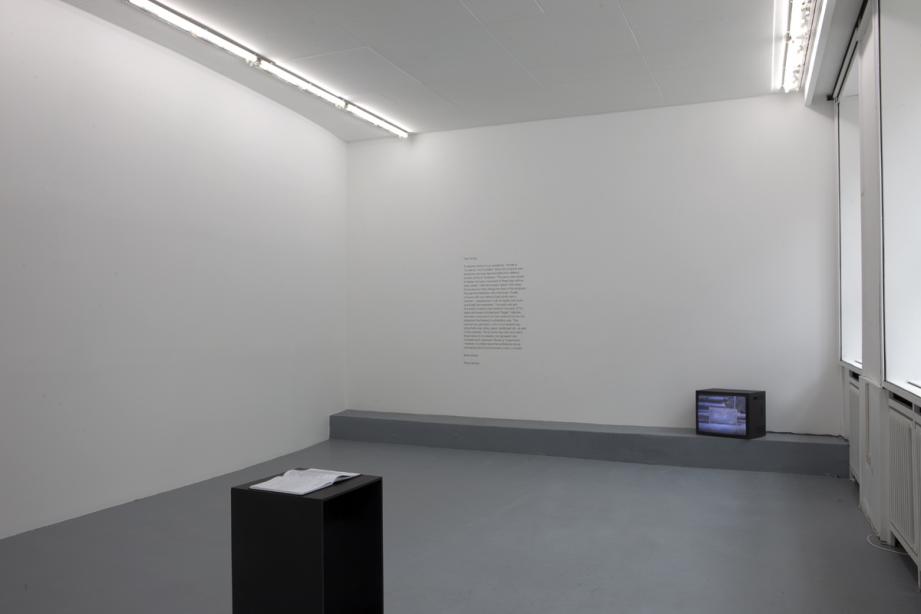 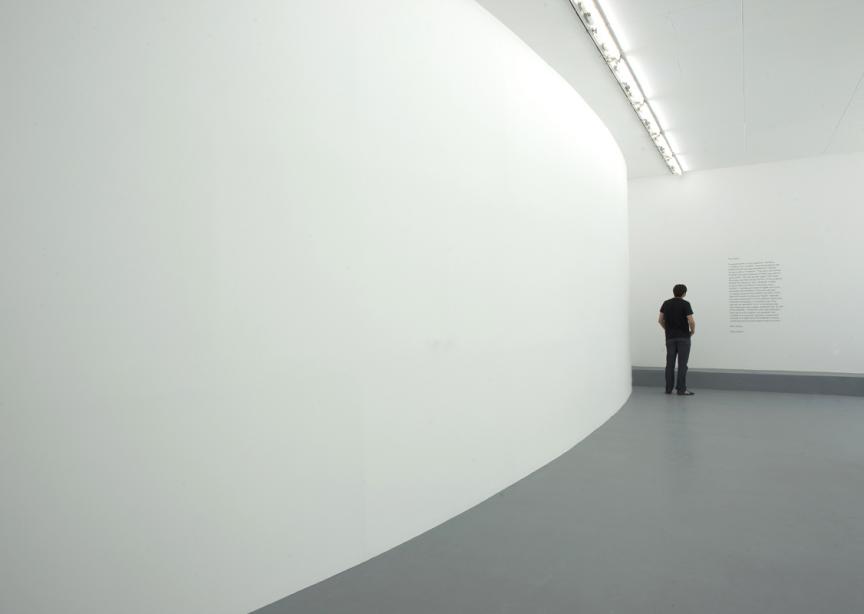 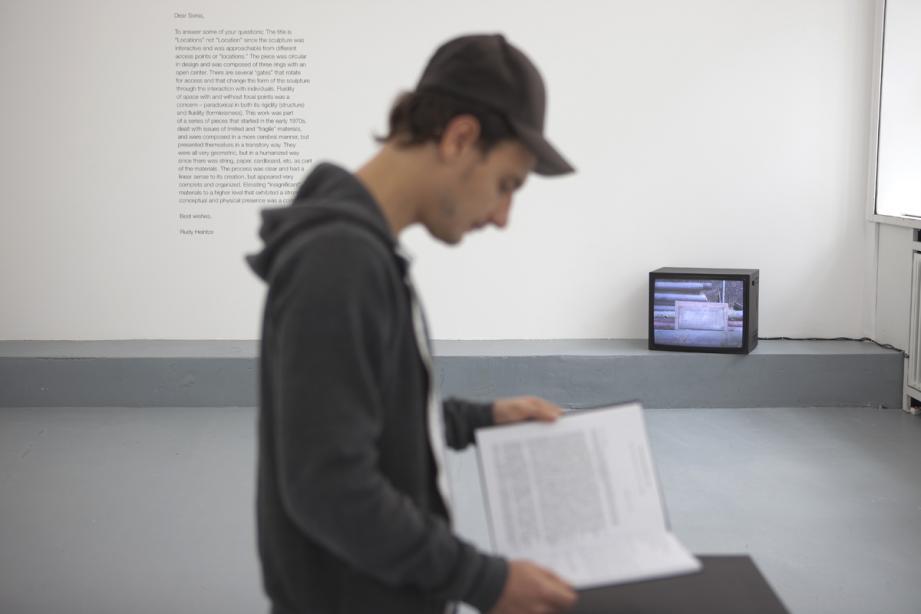 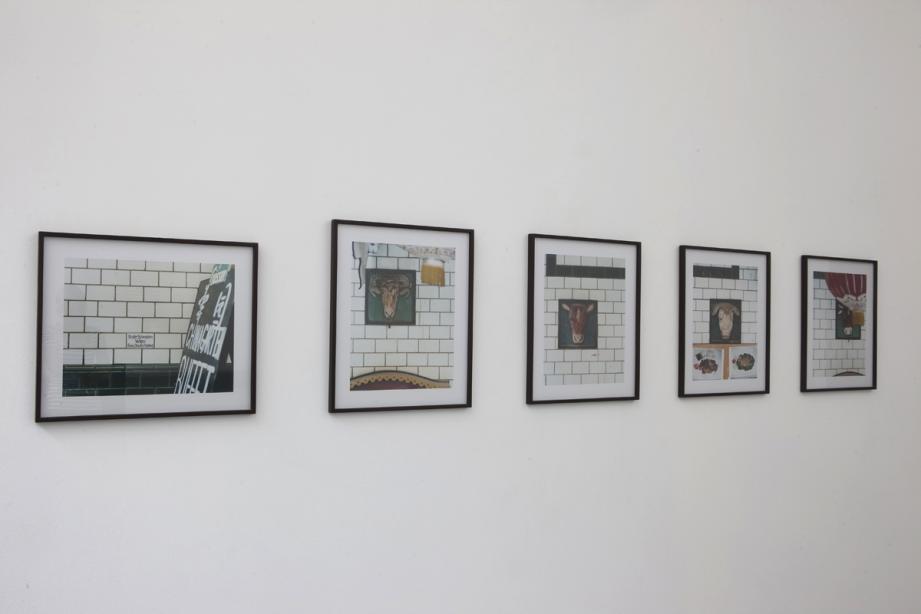 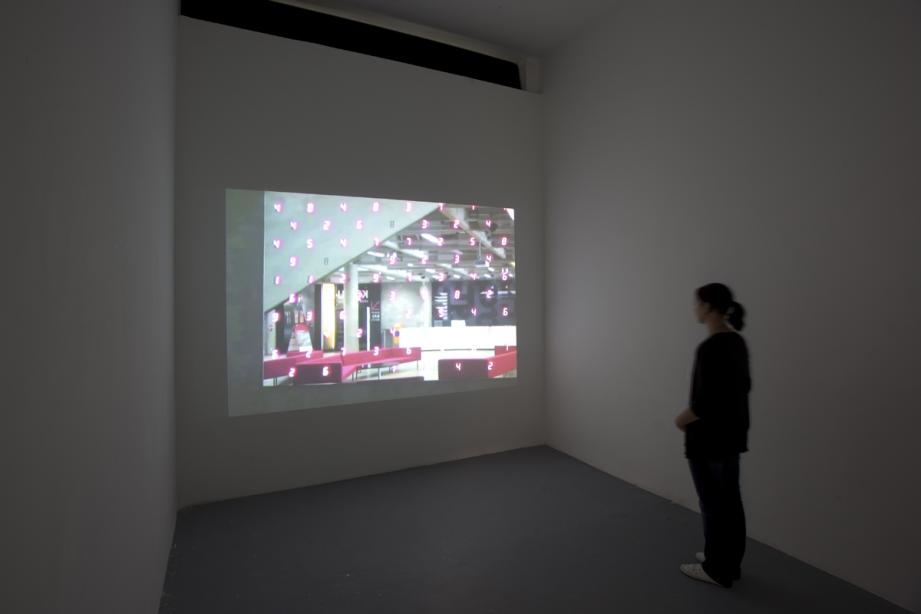 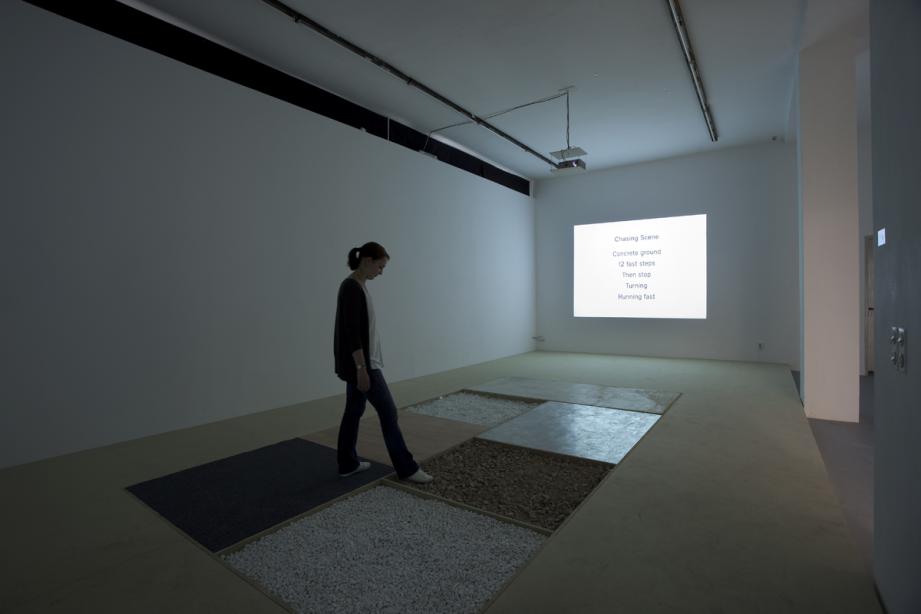 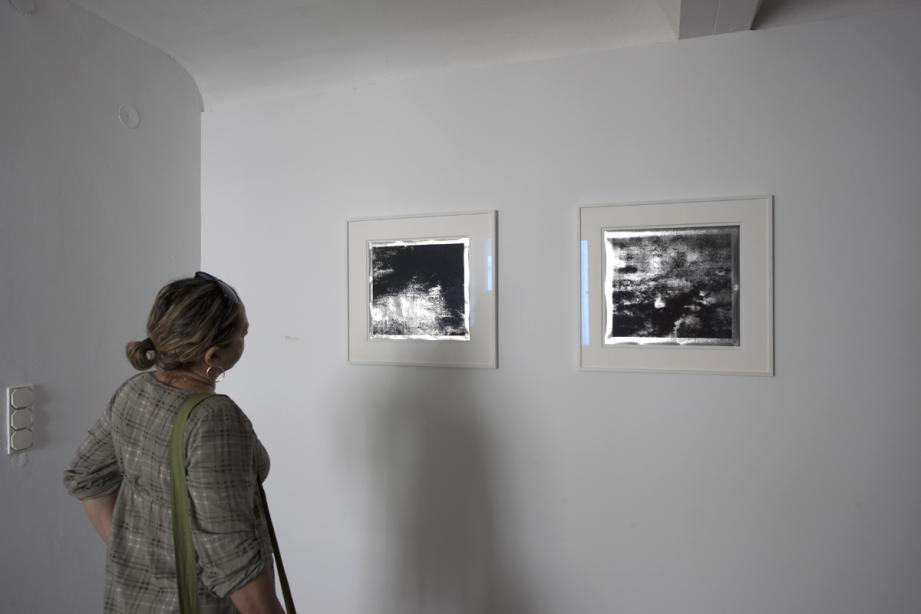 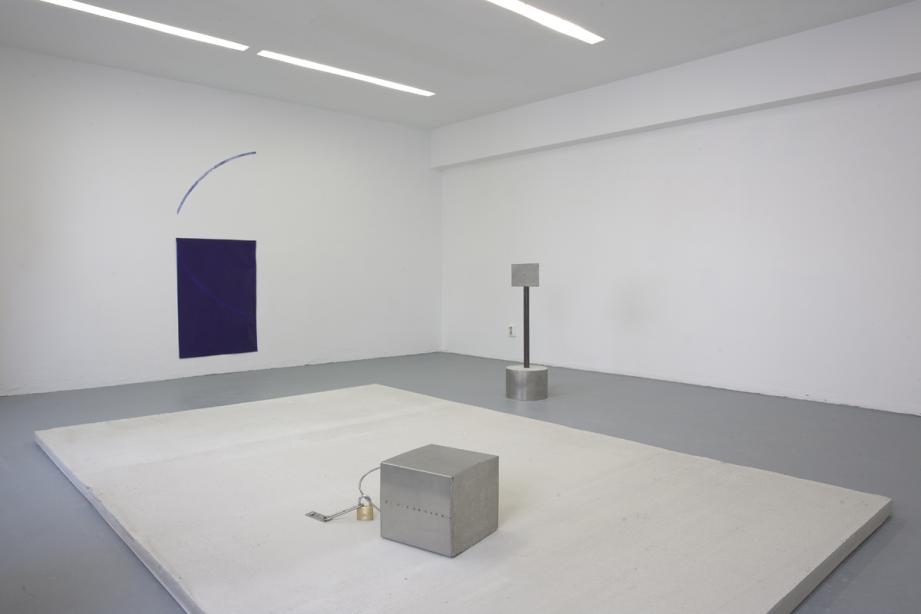 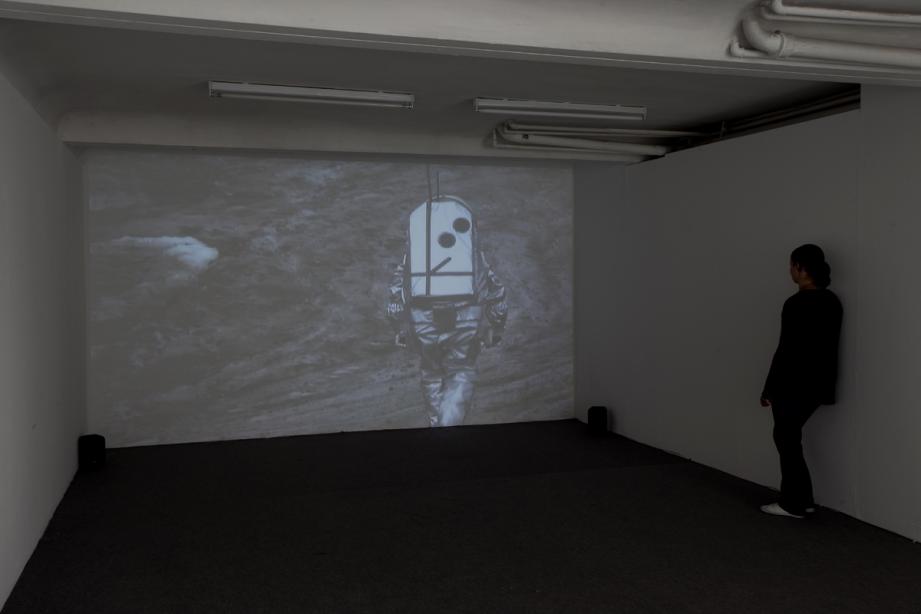 In her cross-media, conceptual works, Sonia Leimer explores the transformations of material and significance. As such, she highlights the resulting shifts in temporal and spatial dimensions. In this way, she combines her interest in fragile content and materials, which are in an ‘intermediary’ state, with the topic of the construction of space and time, forming a central motif in her creative work. The artist examines questions about the foundations of our perception that arise from individual, historical and media-influenced experience. Moreover, the significance of fiction and simulation in the construction of reality plays a key role in her works.
These thematic approaches also run through Sonia Leimer’s current exhibition uns so weiter like a red thread.

In the spatial installation Locations (2010) Sonia Leimer explores the transformation of material in the public space and the bridging of time. The work investigates the whereabouts of art on the public space that has seemingly become superfluous. Leimer shifts their history in a new narrative setting and a new temporal-spatial dimension. By linking a video, a letter, a book and an undulating wall as a reference to Richard Serra’s Tilted Arc Leimer engenders a new context of spatial representation, into which she transposes the sculptures’ histories. She weaves a new narrative between their fragmented settings and thus creates an independent artistic work.

Leimer also frequently looks to film as a reference point and integrates its methods of staging reality into her artistic work. For instance, the video and sound installation Backlot (behind and adjoining) (2010) references the profession of the location scout, whose job it is, as part of the preproduction of movies, to find places that provide suitable settings for screenplays. Backlot shows the fictional movie locations that a professional scout came up with in Helsinki and the surrounding area following Leimer’s instructions as director. Here, spaces morph into film sets and objects into props, and the work thus highlights the merging of real time and cinematic time as well as the overlapping of various spatial contexts. Spatially disconnected from the video projection, fragments of dialog from the associative screenplay are audible, which generate, acoustically, the illusion of different images and scenes.

Alongside spatial interventions, Leimer adopts strategies of re-staging events and of fictionalizing spaces in order to investigate the mediality of places and their histories. As such, it is primarily the relationship between staging and the collective canon of images on the one hand and the concrete physical space on the other that interests the artist. Thus she explores real landscapes and spaces, into which she inscribes new narratives as film settings or props. It may be a Georgian landscape, frequently used as the backdrop for the production of Westerns, or a glacier near Innsbruck, which in the video installation 2030 (2010) is the set for a fictional test mission to Mars. The work revolves around the construction of history through film and humanity’s vision of tapping new lebensraum in outer space – one the one hand as the fantasy of colonizing space, and on the other to escape the destruction of Earth. The video is set in a glacial landscape, similar to Mars, and shows an astronaut on a test walk in the barren terrain. He is wearing a special spacesuit made of Panox/Kevlar, specifically developed for the Mars mission planned for 2030 by the Austrian Space Agency. Here, the glacial landscape is used as a background for a certain narrative and event. Yet the space disappears in two senses: on the one hand the real glacier becomes the fictional Mars landscape, while on the other, in terms of content, the glacier melts away owing to climate change, and a new (living) space opens up in outer space. Owing to the staged ‘visualization’ of this story, in 2030 fictional and documentary levels of time blend.

By making use of manifold practices and levels of staging, Leimer succeeds in thematizing the superimposition of fiction and reality and highlighting the overlapping of various temporal dimensions. In this way, the exploration of time and space and the question of the significance of material in the context of its conceptual processing interweave in Sonia Leimer’s artistic work.