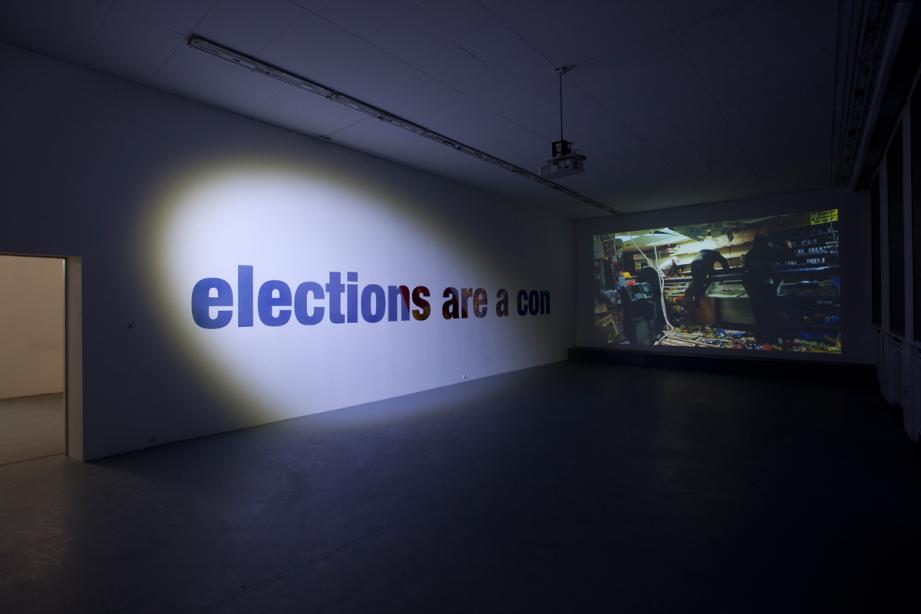 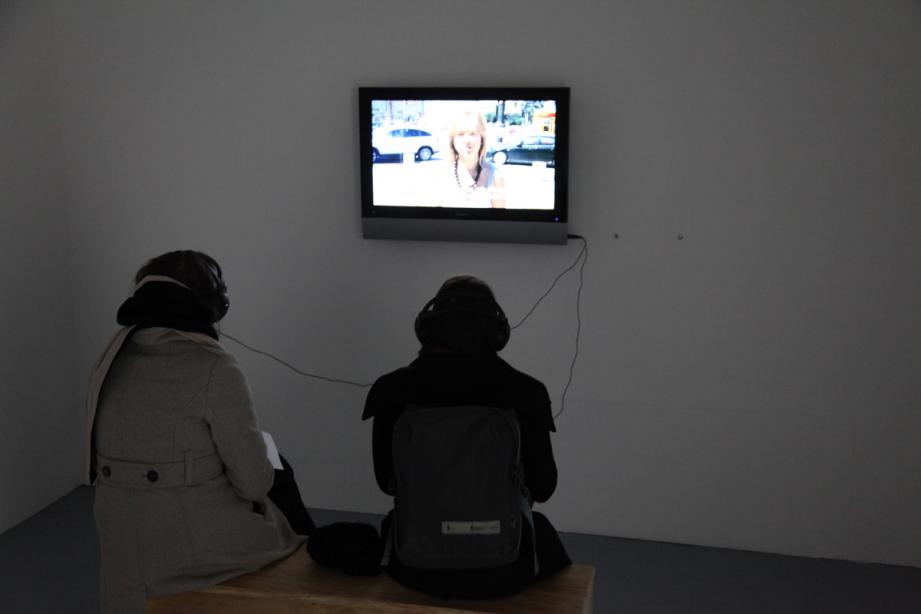 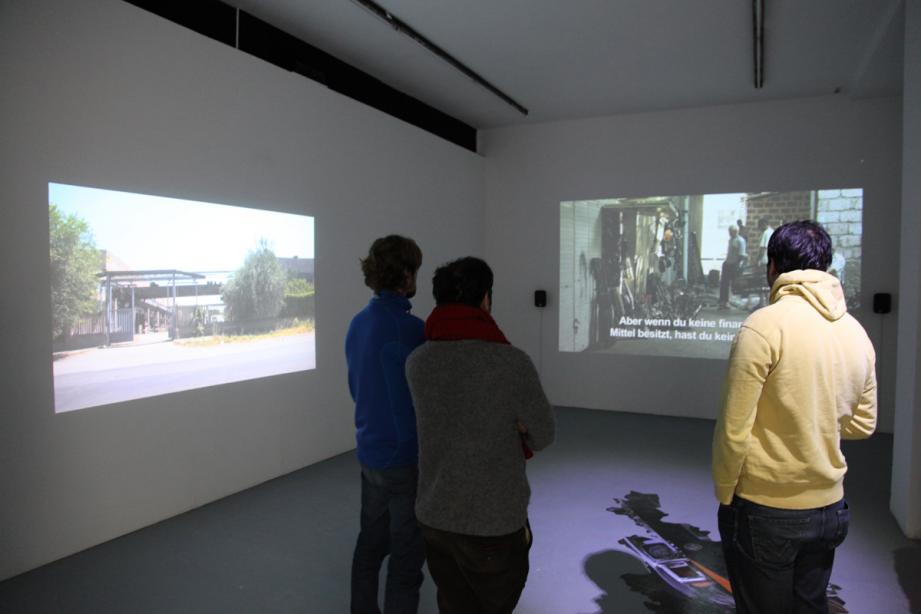 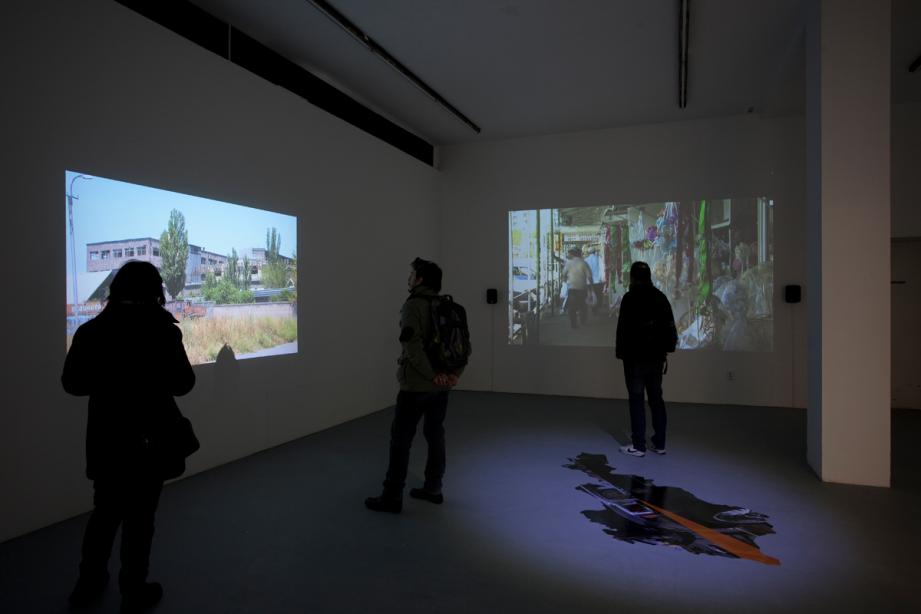 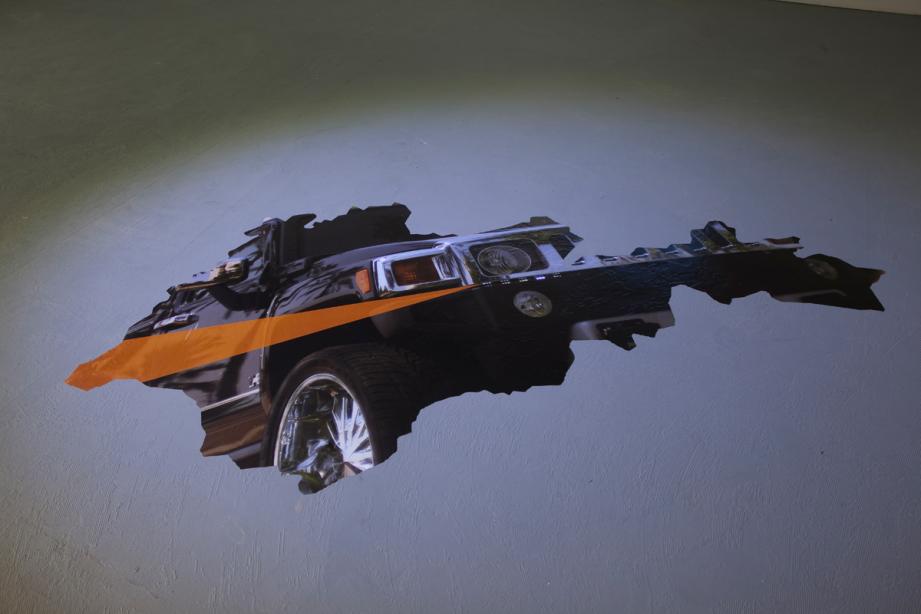 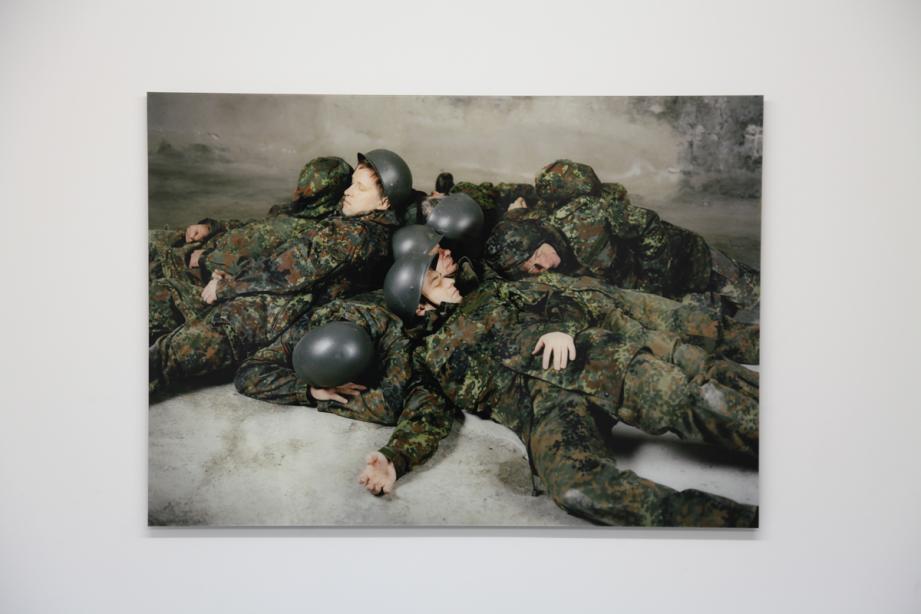 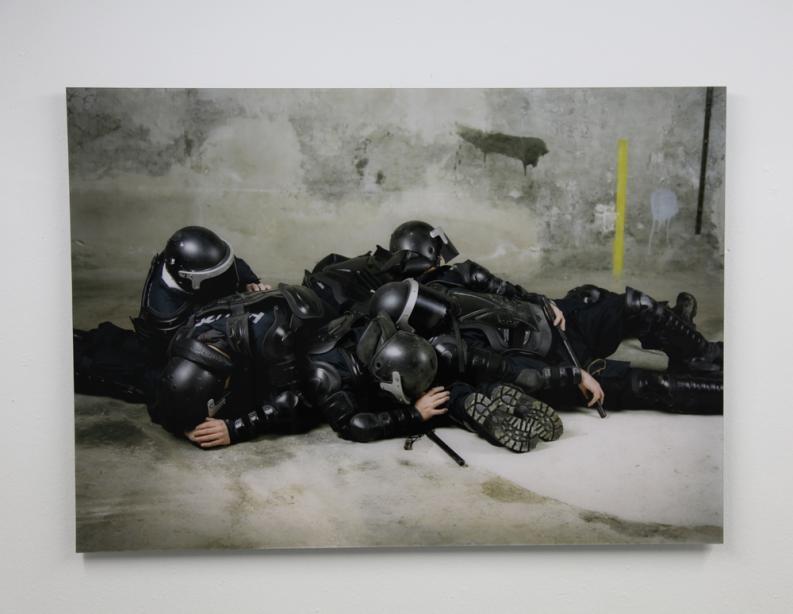 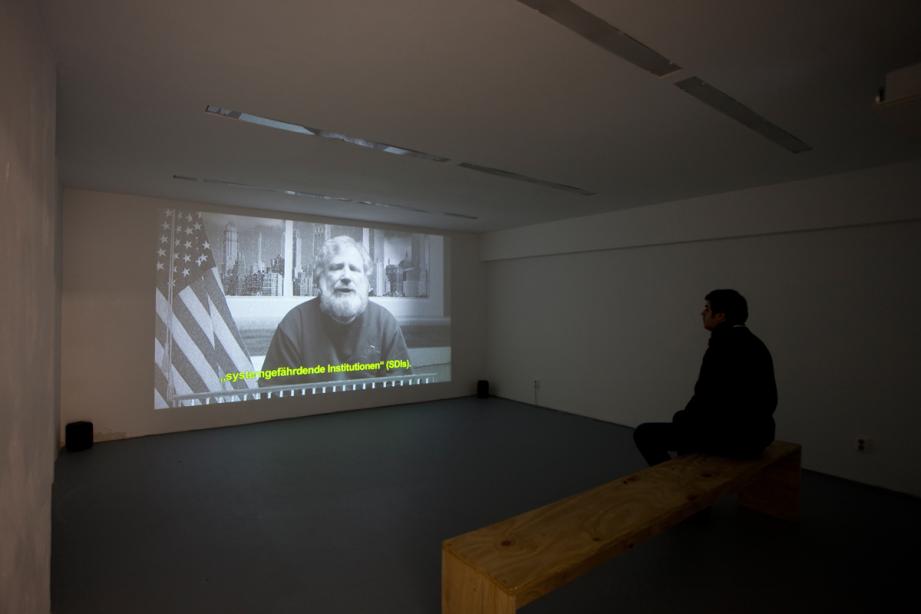 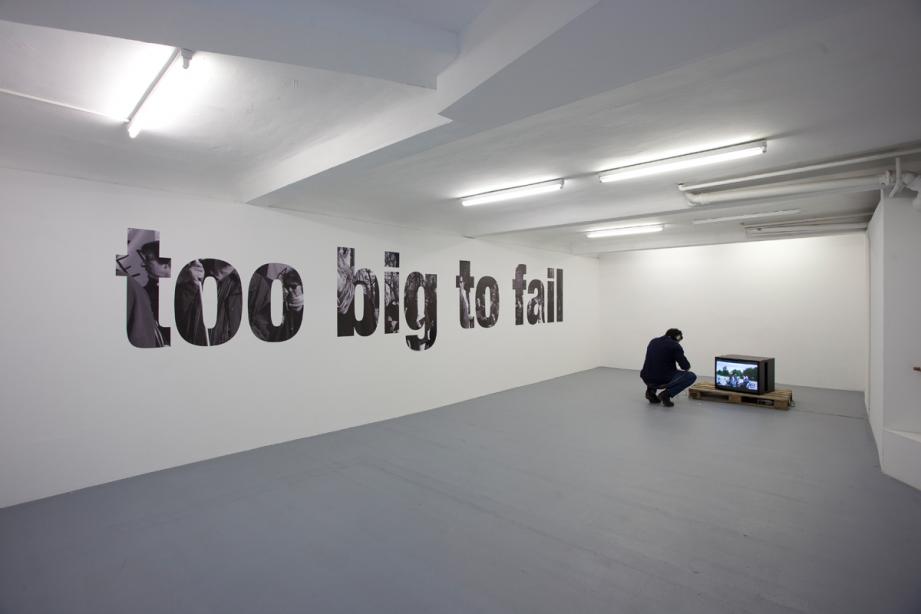 We are delighted to be able to present to you the solo show Nach der Krise ist vor der Krise by Oliver Ressler which runs from February 3 until April 1, 2012.

Ressler’s oeuvre is extremely heterogeneous in formal terms and embraces films, photographs, wall texts and installations – and it explores the background to economic and political crises while analyzing their active mechanisms. He avails himself of documentary and fictional strategies in order to articulate issues of social participation and demonstrate alternative areas of action.

Oliver Ressler’s art addresses the starting points and implications of the financial and economic crisis as well as the underlying flaws in the model of parliamentary democracy revealed by the crisis. As a constitutive approach within his works he opts to deliberately merge active forms of opposition and for a manifest reflective presentation of the current critical social processes.

His films and photographs focus both on the actors but also the critics of and those marginalized by the prevailing political systems. In this juxtaposition power structures become transparent and strategies for change emerge. Oliver Ressler draws attention to concepts of self-determination and possibilities of political and social change.

His works also meet with interest outside of the art debate. Certain formats that his pieces adopt remain in the artistic realm while some of his films are regularly shown at events by political groups. As such, his works are not solely disclosed via the art context and contemporary artistic debates but equally attest to his interest in political debate. They make political crises tangible and serve as a starting point for societal analyses and the question about your own political position.

Seen within the context of the complex political and economic problems facing Europe Oliver Ressler’s first large solo show in Germany seems – in Europe’s banking metropolis of Frankfurt of all places – to be an important model for presenting the reflective options of art as a critical instrument for questioning social processes.

Resslers film works are often based on an interview situation in which the artist retreats as an actor so as to place the focus on the protagonists and create a platform for their concerns. Who talks plays a large role in his works. Exemplary for Ressler’s method is the film that acts as the topical starting point of the show, namely What is Democracy in which by means of interviews with activists he essentially formulates a global analysis of the deep political crisis facing the western model of democracy. Among other things this crisis is manifested in the fact that elections in parliamentary democracies increasingly become rituals devoid of meaning, while the real decisions are made outside of public debates. The wall text Elections are a Con uses striking pieces to alert us to this danger.

Ressler explores the handling of the financial and economic crisis and the social consequences in his films The Bull Laid Bear and Robbery. While the former examines the political and economic strategies employed in the bank bailout Robbery places the plundering by youths in 2011 in Great Britain in a causal relationship with the plundering of numerous public purses by governments. The wall text Too Big to Fail also explores the bank bailout plan. The words that are often used on a political level as legitimization for saving the banks in times of crisis are formed from a photo depicting people on a demonstration protesting “Wir zahlen nicht für eure Krise” (We won’t pay for your crisis) and points to the wish to also be “too big to fail” as a global movement.

Oliver Ressler’s artistic oeuvre also includes projects in public space. The work Resist to Exist originally conceived for urban space in Copenhagen refers to forms of re-appropriation and political intervention. With reference to the social activities of movements such as those of the Piqueteros in Argentina during the 2001 crisis means of acting within the crisis-ridden Capitalist system are shown.

Socialism Failed, Capitalism is Bankrupt. What comes Next? addresses the precarious situation of the Armenian population. In the 2-channel video installation impoverished vendors describe their struggle to survive in the crisis, the worsening of their living conditions in the post-Soviet era and their hopes and expectations of social change.

Unlike his film works Ressler’s photographs entitled We Have a Situation Here show an orchestrated scenario. Police officers, soldiers and managers lie motionless in a heap. While these actors and guardians of the existing balance of power lie stripped of their function questions arise as to whether and how an alternative system is feasible and how it can be structured.

This concept of a re-structured democracy and political autonomy is an inherent component of Ressler’s works, as the latter not only paint a picture of political and economic structures but also show how to question and alter existing orders.

In the coming years the exhibition Nach der Krise ist vor der Krise is to be continued with the addition of current works. The next stop for the project After the Crisis is before the Crisis is in Galleria Artra in Milan (curator: Marco Scotini, 28.02. – 14.04.2012).

Oliver Ressler, was born in 1970, and lives and works in Vienna. He realizes exhibitions, works in public space and makes films on subjects such as economy, democracy, racism, forms of opposition and social alternatives. His projects were shown in solo shows at the Berkeley Art Museum, USA; Platform Garanti Contemporary Art Center, Istanbul; Museum of Contemporary Art, Belgrade; Kunstraum der Universität Lüneburg; Centro Cultural Conde Duque, Madrid; Alexandria Contemporary Arts Forum, Egypt and . Ressler has participated in over 200 group exhibitions, including MASS MoCA, USA; Institute, Sao Paulo; Van Abbe Museum, Eindhoven and the biennials in Prague, Seville, Moscow, Taipei and Lyon. For the Taipei Biennial 2008 Ressler curated an exhibition on the anti-globalization movement, A World Where Many Worlds Fit, which was also shown 2010 in the Foreman Art Gallery of Bishop University in Sherbrooke, Canada.

In 2008 his book Alternative Ökonomien, alternative Gesellschaften (Alternative economies, alternative societies) was published by Promedia Verlag. In 2002 the video This is what democracy looks like! received the International Media Art Award of the ZKM.