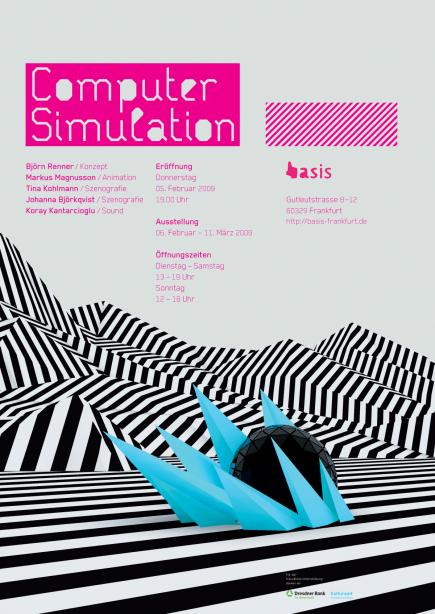 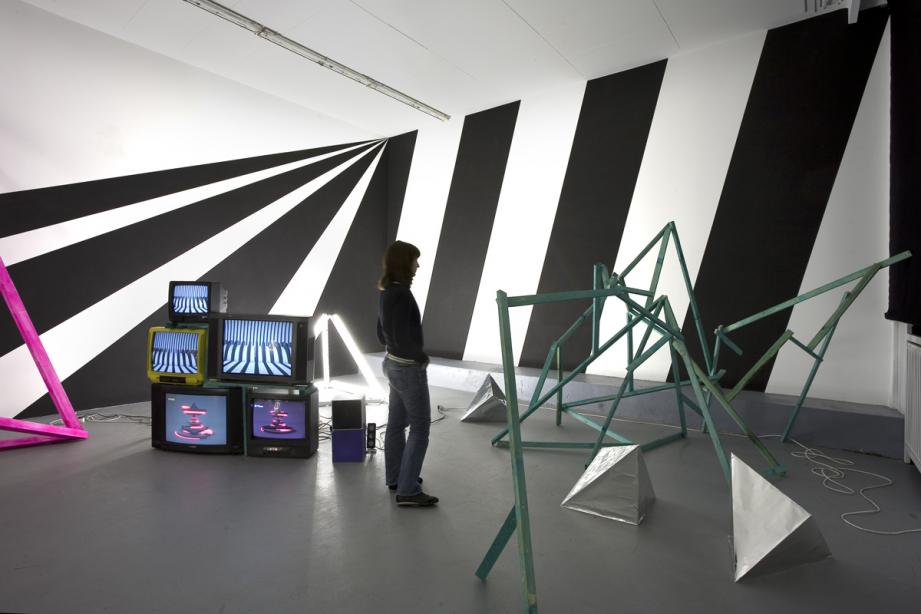 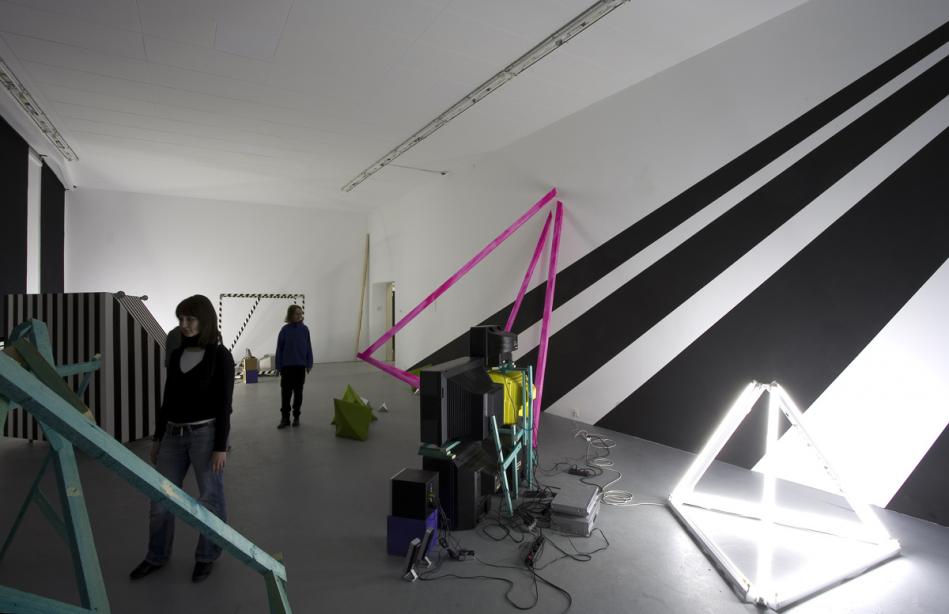 Björn Renner’s current installation computer Simulation, which was developed for the exhibition at basis, is an attempt to think simulation non-simplistically as a concept central to how the world is experienced. Formally speaking “Computer Simulation” draws on its title by translating a two-dimensional, digital computer simulation of the kind familiar in various areas of application into a three-dimensional, spatial, analogue realization.

The polysemous concept of simulation is the starting point of Renner’s artistic inquiry, while deliberately stylized scenery aims at opening up a subjective semantic space for the viewer’s experience.

Using povere materials that only superficially aspire to please aesthetically, the installation imitates in three dimensions a two-dimensional, digital interior design and develops what one might call a substitute for the digital prototype. All the installation’s parts and subparts revolve around aspects of the meaning of simulation, for instance in the area of textual elements and language use, whereby semantic content defers to the enigmatic, encoded, or even paradoxical-senseless meaning of signs and sounds. Language and the meaning of signs no longer stand for the exchange of information in Renner’s installation but take their lead from its affective surface. Using diverse materials, symbols, and signs, and not without irony, he builds up an evocative mood that calls to mind the performative elements of ritual, pseudo-spiritual acts.

The fragmented legibility of individual installation elements that constantly emerges and the resulting difficulty in generating feasible patterns of understanding point to Renner’s strategy of employing visual overload to elicit enigmatic and associative moods in the viewer. The basic formal principle underlying the work, Renner has said, is the idea of developing a placeholder for the projections the viewer sees in the work and its evocative elements.

Björn Renner feels no need to conceal the theatrical staging or the stagedness of his installations and films. His strategy of taking on board the breakdown of illusion in what is shown and the disclosure of the mechanisms by which pictures are staged is direct and head-on.
Renner’s works seem to reflect emotional or psychic states rather than following a clear ordering. Viewed thus, a dialogue or a space can be grasped as a kind of associative model for psychic processes.
Björn Renner’s film and installational works range from claustrophobic and enigmatic images of psychic states to the ongoing construction and deconstruction of narratives or spatial arrangements. His working methods are closely related to popcultural and surrealist concepts of art production, and also show the influence of US underground film of the 1950s and ’60s.

Björn Renner was born in Mainz in 1972. He lives in Frankfurt/Main and works in a studio at basis. In 2008 Renner received a working scholarship on the program of the Isola di San Servolo, Venice. His works were presented in the closing exhibition and at the Künstlerhaus Mousonturm, Frankfurt/Main, in 2008.