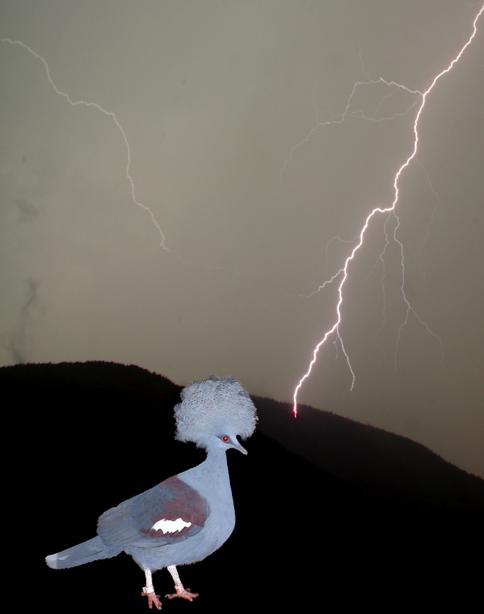 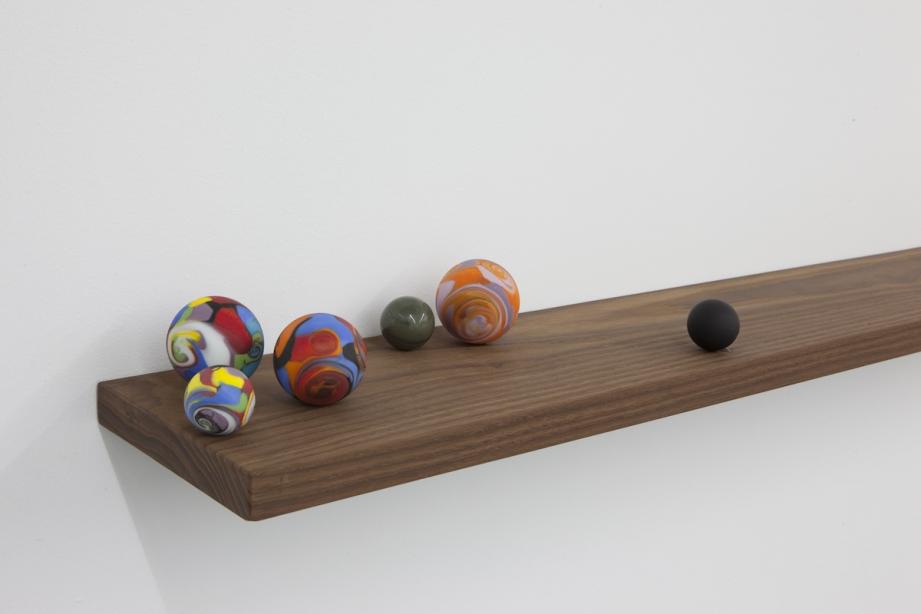 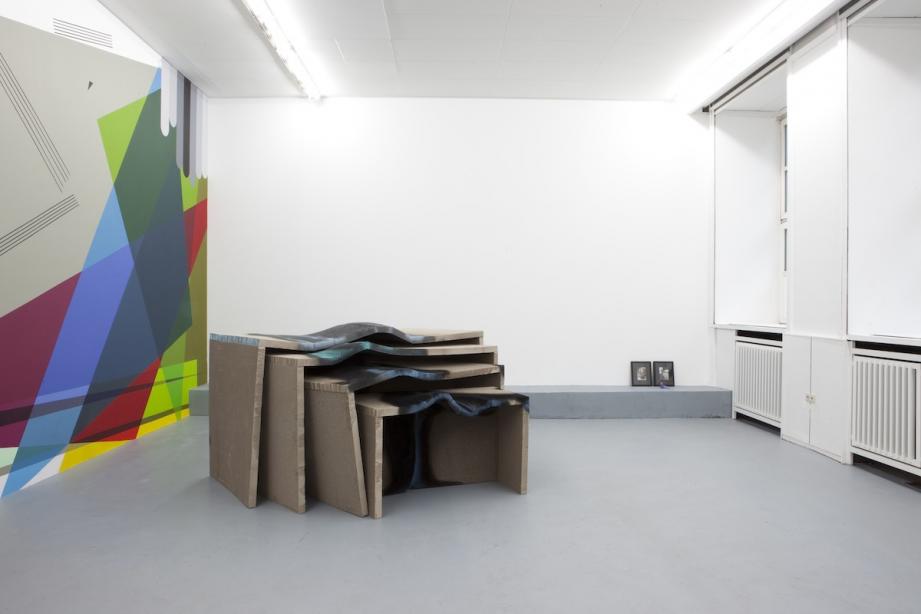 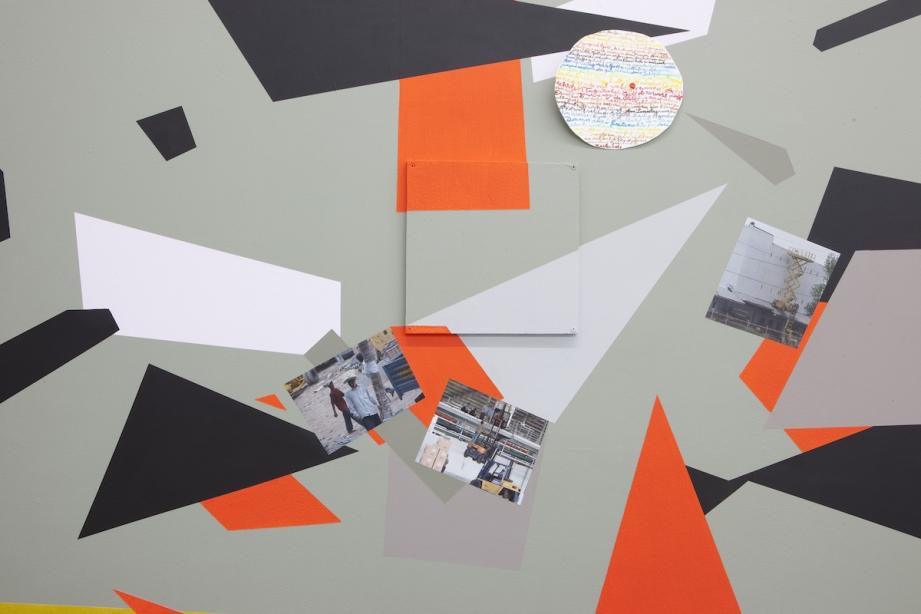 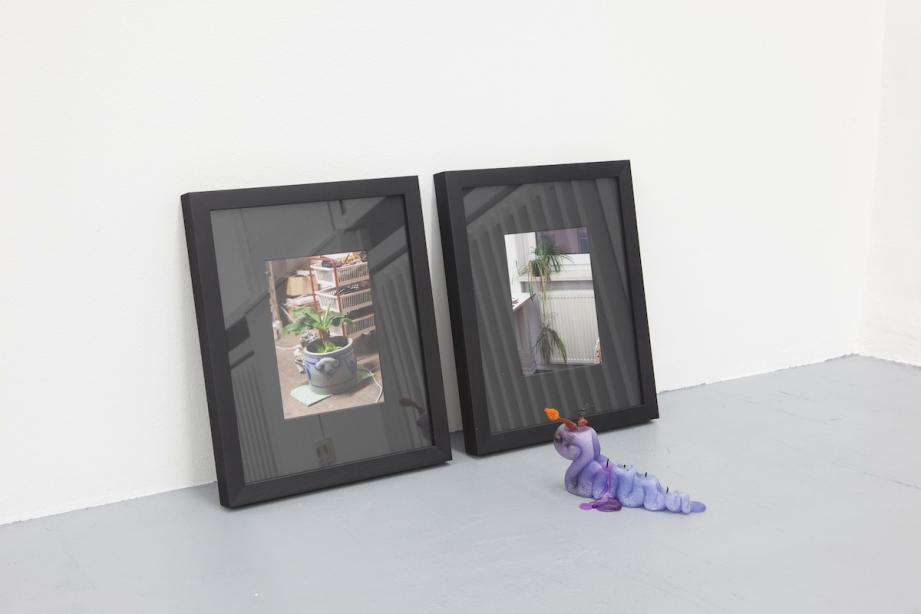 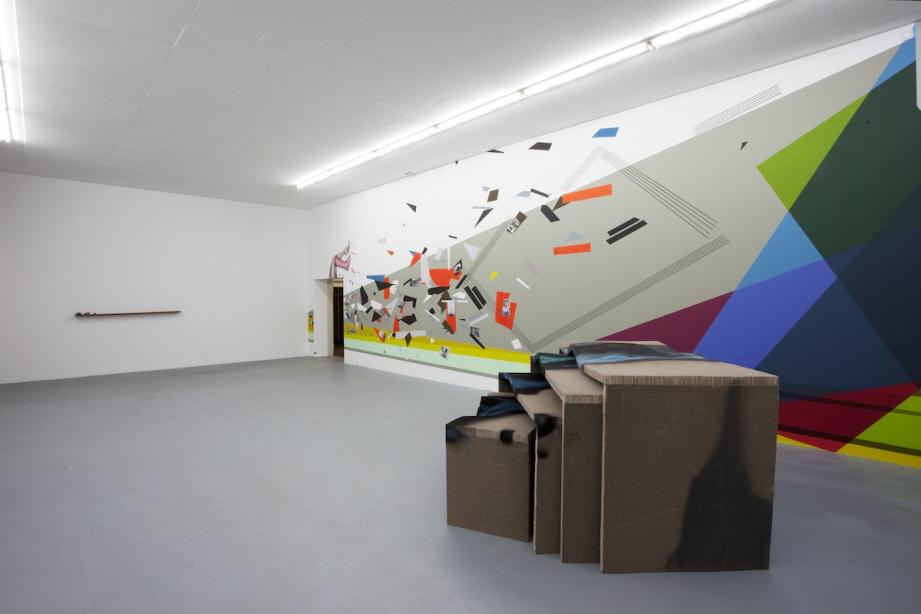 Gheorghe has produced a group of works – consisting of four new individual pieces – especially for the basis exhibition space. At the forefront of this project is the desire to explore the visual and conceptual aspects of diverse pictorial strategies. Gheorghe is particularly interested in the intermedial interaction of manifold design levels. As a consequence, her installations explore experimental techniques of sculpture and design as well as painting. This results in complex constellations in the installation as a whole, in which Gheorghe makes reference to a wide range of examples from art and design history as well as stimuli from popular culture.

Based on the tensions between conception and materiality and between art and design, Gheorghe creates a broad network of levels of meaning. These multiform references serve as a starting point for her independent work. At the same time, it is precisely these complex reinterpretations and the procedural character related to them, which are the hallmarks of Gheorghe‘s working method.

In her work Negligés, 2009 Gheorghe contrasts the strictly disciplined forms of minimalist design to the organic shapes. Instead of creating smooth surfaces – as the simplicity of the original form might lead us to expect – Gheorghe makes use of the simple material of corrugated card. As a source material, corrugated card itself stands out as a means of imparting ambivalence: it appears at once porous and solid, is manufactured industrially and yet shows slight irregularities. While the individual wave is instable, the multilayered final product is of very high stability. Gheorghe highlights the form‘s peculiarity and organic malleability, intervening in and manipulating its strict form. The work‘s seriality further heightens this impression. While it stringently makes reference to the minimalist set of shapes, on the one hand, this repeated manual interference intensifies the uniqueness and non-neutrality of the artistic form, on the other hand. In her work, Gheorghe probes the significance which minimalist aesthetics and her postulate of pure visual art can assume today.

The work Bird Protection, 2009 “…” is pitched directly to the level at which the viewer experiences it. Hand-crafted, premium marbles are balanced on a block of wood. They are modelled on cheap bouncy balls as we know from our childhood. Like bouncy balls, they too appeal to the observer on both a haptic and an aesthetic level. Their auratic function as an artwork seems to be at odds with their practical use as a toy. Yet, as handicrafts they seem to capture colours at a level far beyond that of their visible surface, which the viewer can only perceive in his or her imagination. Gheorghe uses suggestion and association to make reference to the manifold ways in which objects can be perceived. This combination of an everyday object and a luxury one once again poses the question of how much the object is worth.

The portrait work ‚Mir geht es fein und die Mädchen in Deutschland sind alle sehr schön (Buddies)‘, 2009 consisting of two photographs, is a continuation of Gheorghe‘s Buddies series. Buddies are finds Gheorghe groups together in an ensemble. In this selected compilation and the playful symbolism resulting from it, the objects evoke narrative associations. As objects they can be said to stand for themselves while, at the same time, embodying the socially constituted relationship to the object.

In terms of experience theory, Carmen Gheorghe‘s works focus on mental lacunae; they make use of the instant at which the interpretation of a work is still open and draw in the viewer in the process. Gheorghe opens up myriad possibilities of interpretation when she makes the state of liminality of the observer, who stands in front of the artwork, her subject. In doing so, in a metaphorical sense she repeatedly explores the conventions of society as well as those of art and design while cracks appear by acknowledging the uncontrollable. This notion is reflected symbolically in her works that show that it is impossible to differentiate between aesthetic and idealistic experience. By presenting both the antagonistic and the untranslatable, her art illustrates the status of the intermediate, an element so important for it facilitates the creation of new contexts by dissolving existing ones.

Carmen Gheorghe lives in Frankfurt / Main and works in a studio provided by basis. In 2007 she completed her studies at the Städelschule in Frankfurt / Main. She has shown her works in different solo exhibitions, among them Flamboyant Boy at Gallery Ritter & Staiff, Frankfurt / Main, in 2007 and Oeliger Belag dank hartnaeckiger Absichten at Gallery Meerrettisch, Berlin, in 2006. Furthermore, she has participated in several group exhibitions, among them At Five to Ten by the Old Bridge, My Sweetheart at Gallery Neue Alte Bruecke, in 2009, Glass can be broken by: Glas at Gallery Blast, Cologne, in 2008 and “Various Small Fires”, the MA CCA at the Royal College of Art, London, in 2007. In 2009 she received a travel scholarship from the Hessische Kulturstiftung.