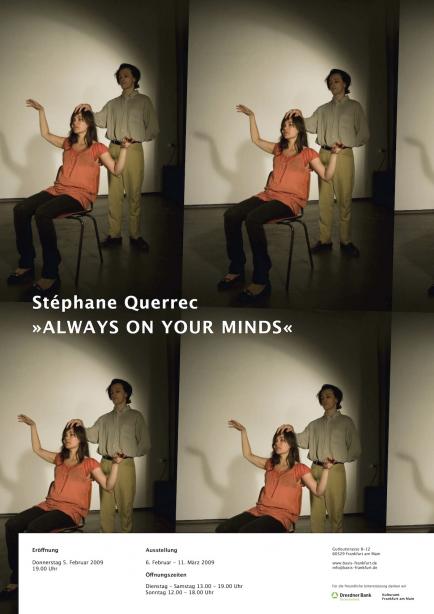 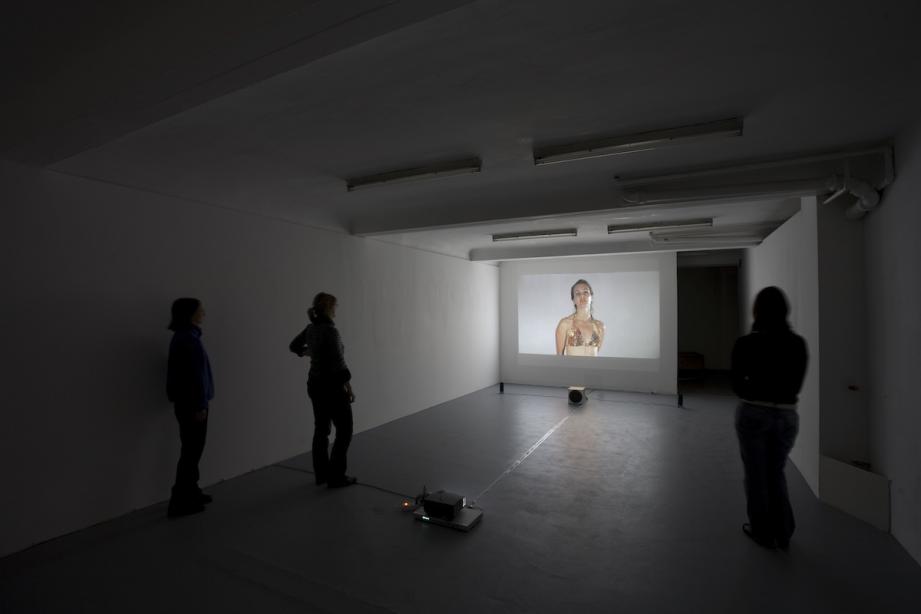 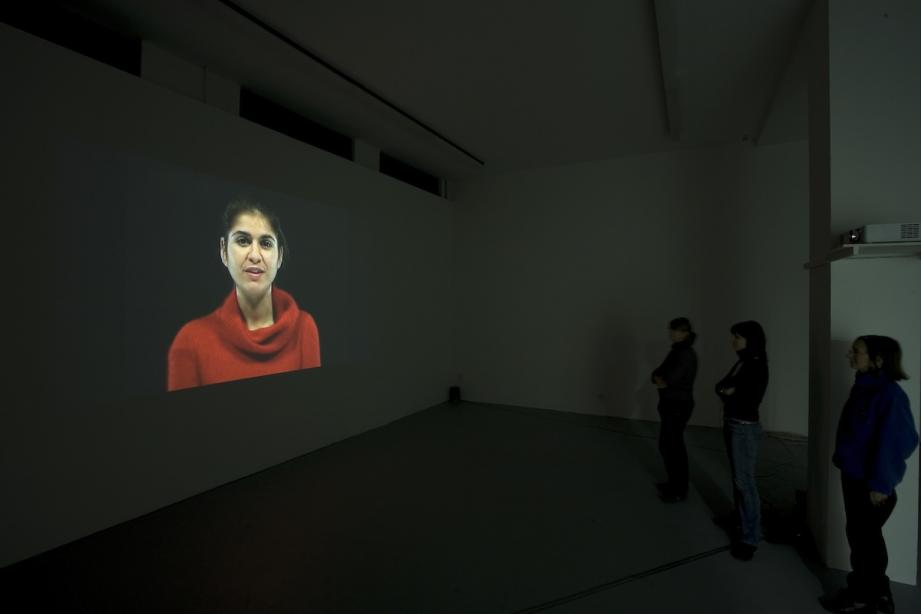 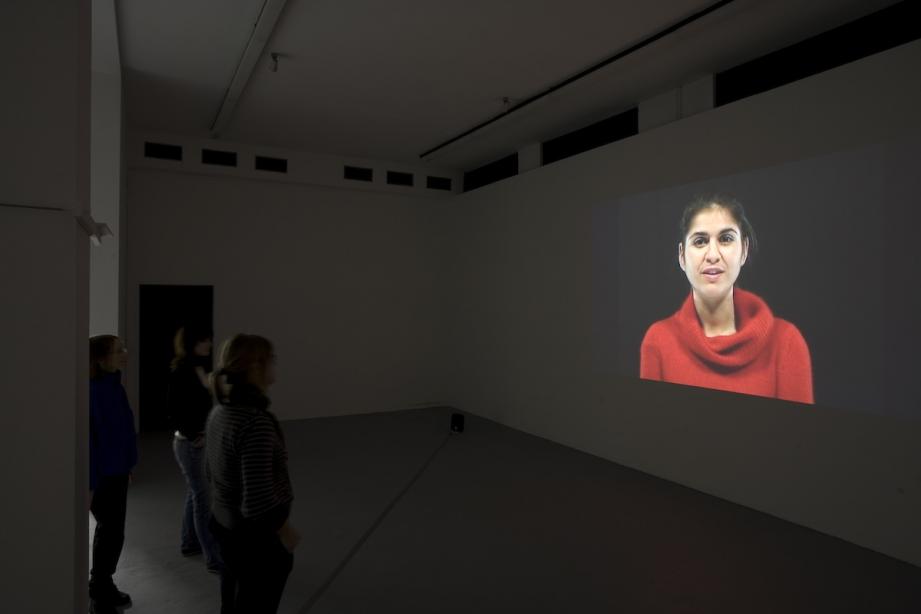 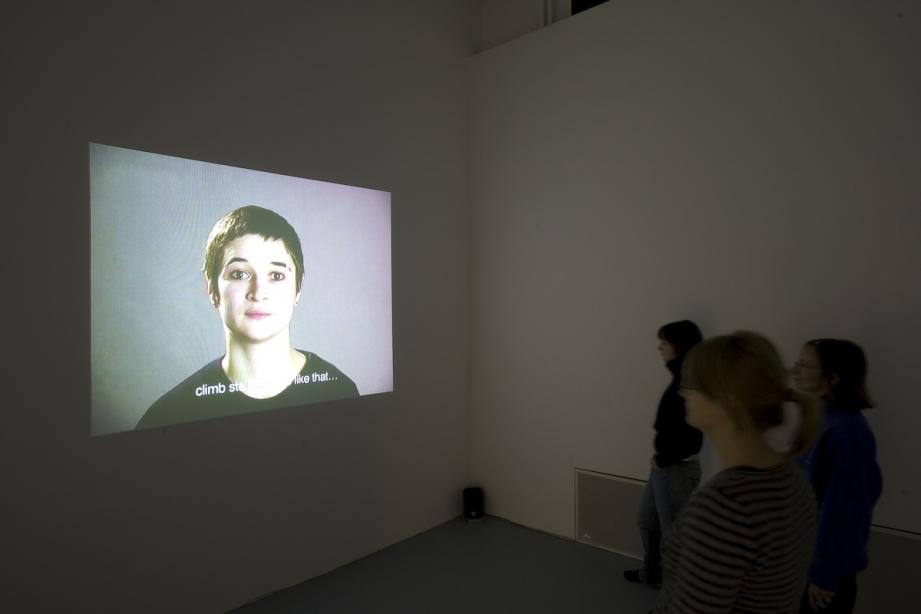 Stéphane Querrec’s film works follow a rigorously conceptual pattern that is underpinned by explorations into the viewer’s identity, the identities of the speakers in his films, and how these parameters interrelate.

The three works FLOW, BLOW and FLAW produced in a formally reduced framework from 2005 to 2008 each present a female protagonist speaking a not-easily-classifiable text before a neutral backdrop. The substantive aspects that interest Querrec unfold in a three-tier structure. To begin with, the spoken texts present a wide range of text types met with in everyday contexts. At another level, the figures and the way they address the viewer head-on is a central motif. There is a third level, that of reflection, where the purpose and identity of the speakers is consistently withheld. This in effect serves to turn attention to the camera as instrument of artistic mediation.
All three aspects relate to fundamental patterns in how we communicate and how we experience today’s primarily media-mediated world. The viewer can experience the intensity of the actresses’ presence as unpleasant and threatening, since the thematically dissociative texts define clearly neither the protagonists’ identities nor the viewer’s position. From the viewer’s standpoint this dissociation gives rise to a further break with the associative patterns one unconsciously seeks vis-à-vis the women in the films. Who is depicted? What is her relation to the text she speaks? What are her motives for speaking the text? One is hardly in a position to answer such questions, yet one continues to ask them. The divergence of context and text type, protagonists and motives for the presentations lends Querrec’s works a distinctive tension that one can also experience as provocation.
In all three films FLOW, BLOW, and FLAW the depicted figures try to stimulate attention, which comes about to no small degree from the associative and in part more explicit text sequences.
The mood and presence the works evoke by means of minute shifts in relation to everyday situations or predictable reactions and behavioral patterns in the persons involved break with known and clearly classifiable communicative contexts. The rupture leads to the viewer being alienated from the protagonist, a breakdown in the viewer-image relationship, and a constant questioning of the generation of meaning in the narrative thread. By shifting familiar contexts that are mostly a product of automatic reactions Querrec points to the complex levels of our medially determined perception, whose superficiality usually only emerges when - as occurs in the aesthetic experience of his works - it breaks down.

This breakdown and the emergence of the inquiry into the fundamental determinations of individuality repeatedly reference a questioning of the subjective constitutions of the protagonists of the films, whose identities are not inferable from their mere presence and monologues. The automatic habits that come into play when one tries to figure out someone’s identity simply from their presence and what they say are repeatedly and deliberately undermined in Querrec’s arrangements. In the context of their aesthetic experience this gives rise to a heightened awareness of the components of one’s own subject formation.

Stéphane Querrec was born in Biarritz and lives and works in London. Since 2005 his works have been on show in international exhibitions at many venues including the Bonnefantenmuseum, Maastricht, Museum Moderner Kunst Stiftung Ludwig, Vienna, 2nd Edition Artist Screening Beauvoir, London, Bonner Kunstverein, Bonn, Cinema MK2 Bibliothèque François Mitterand, Paris, and The Willow Pump Station Gallery, Houston. In 2008 he received a working scholarship at Kingston University London and the Jan van Eyck Academie, Maastricht.