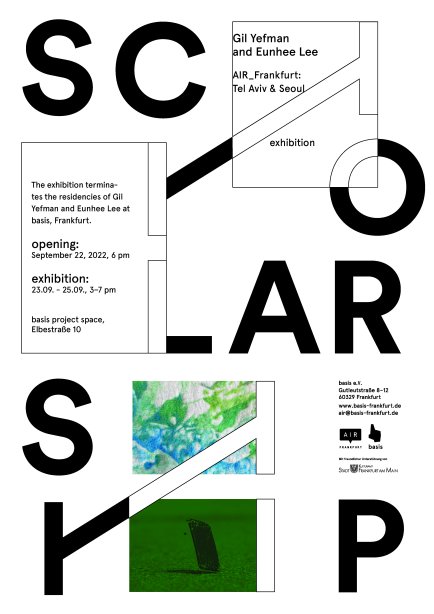 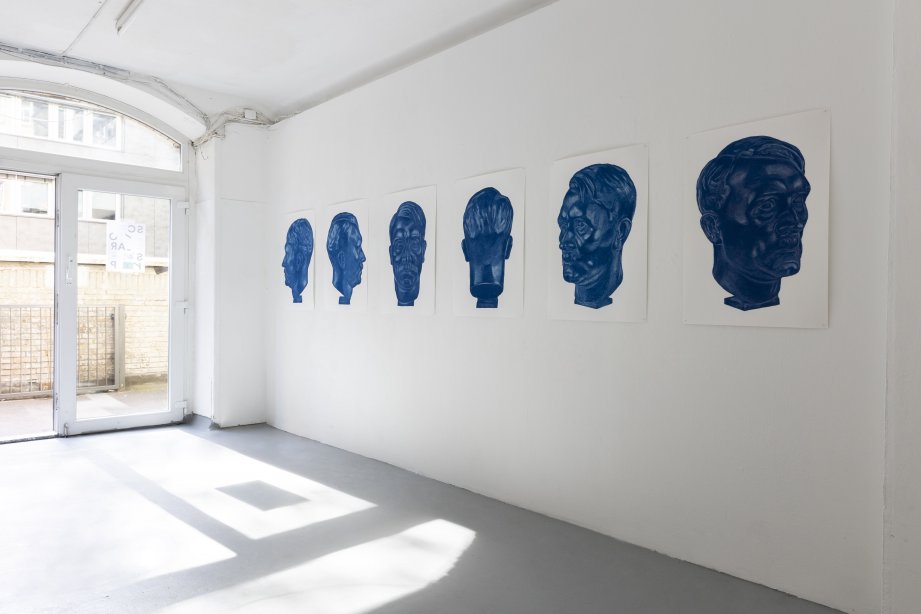 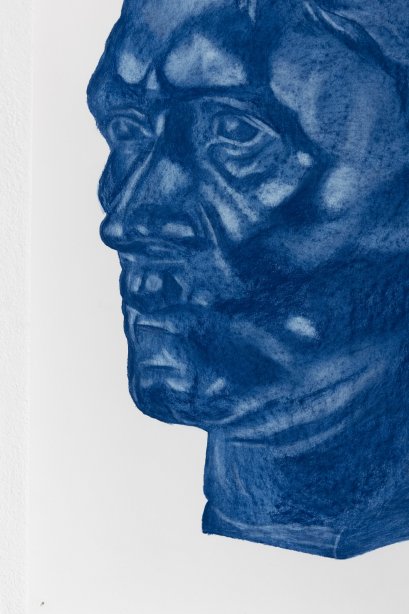 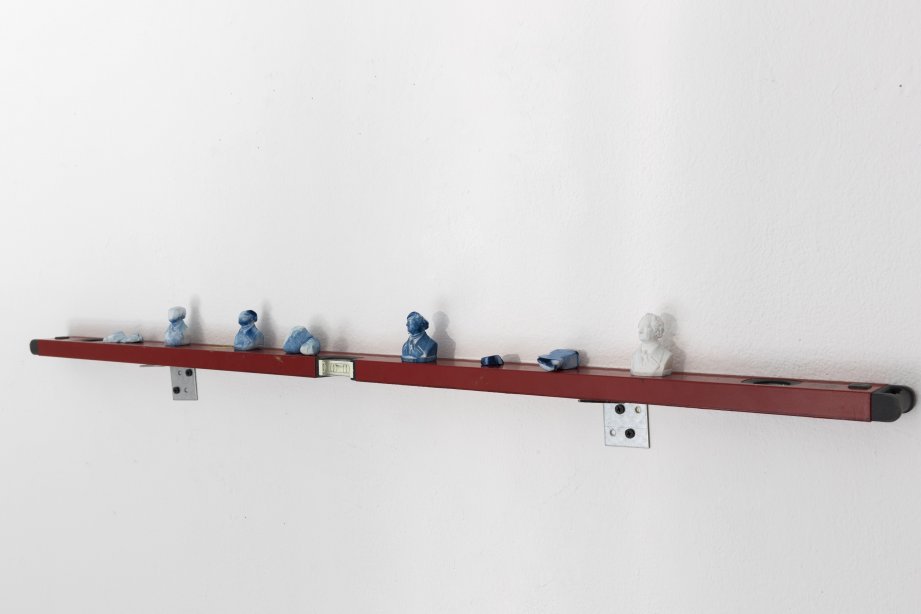 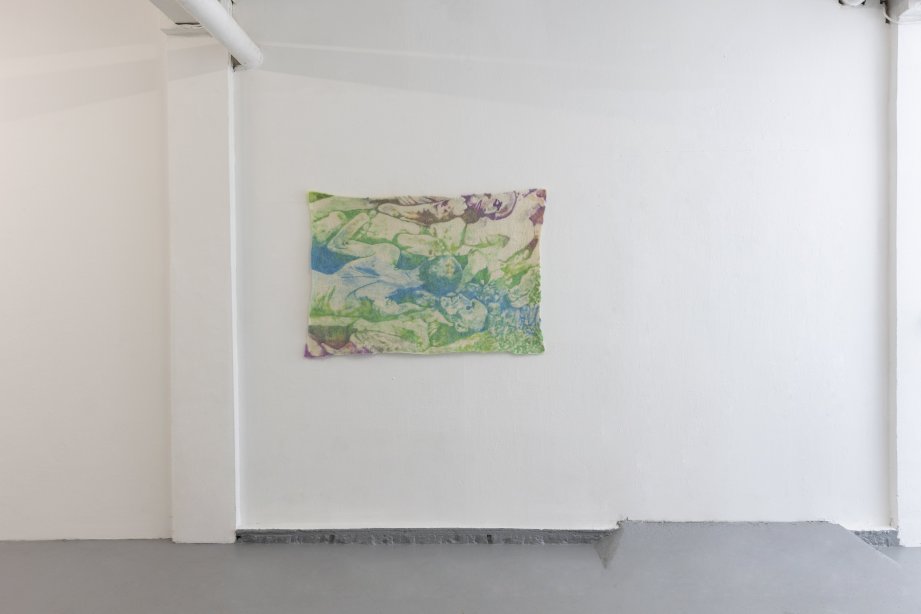 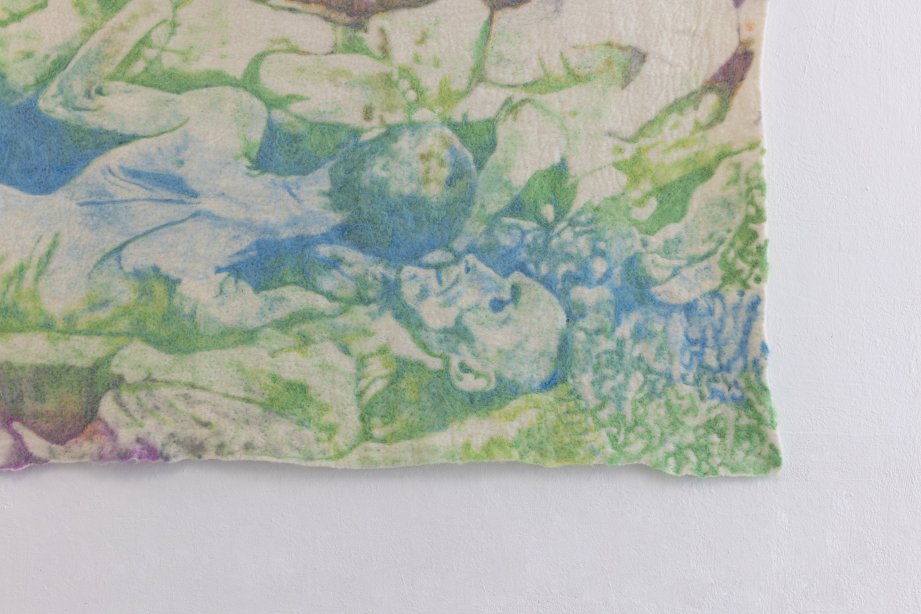 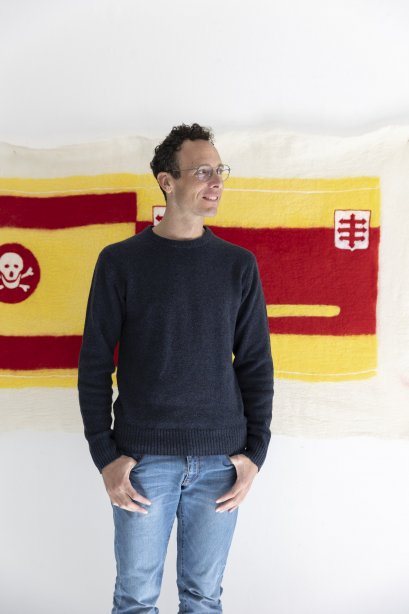 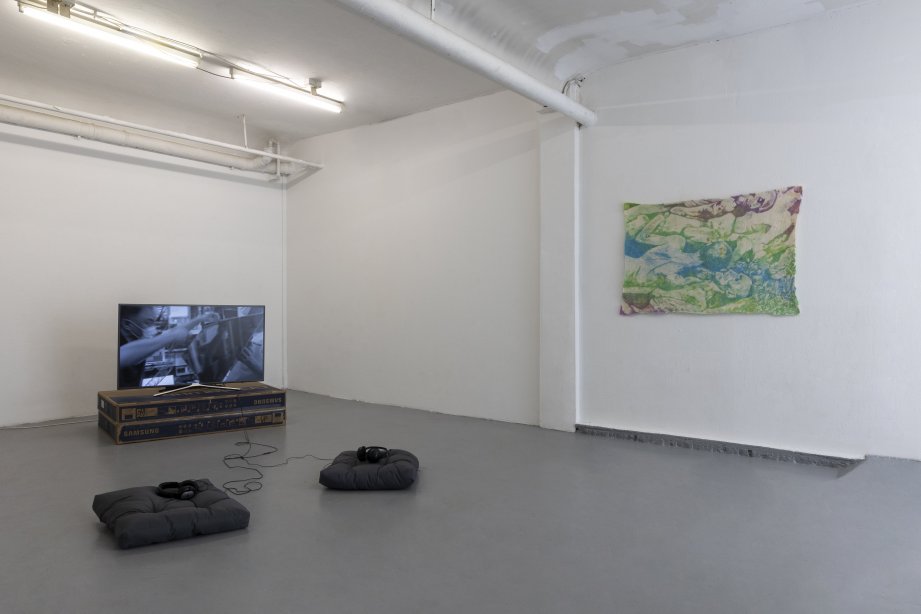 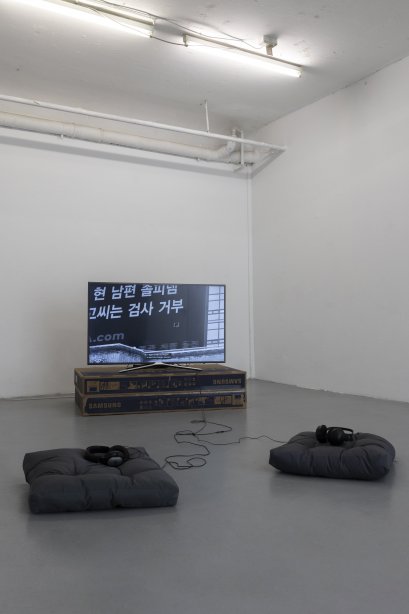 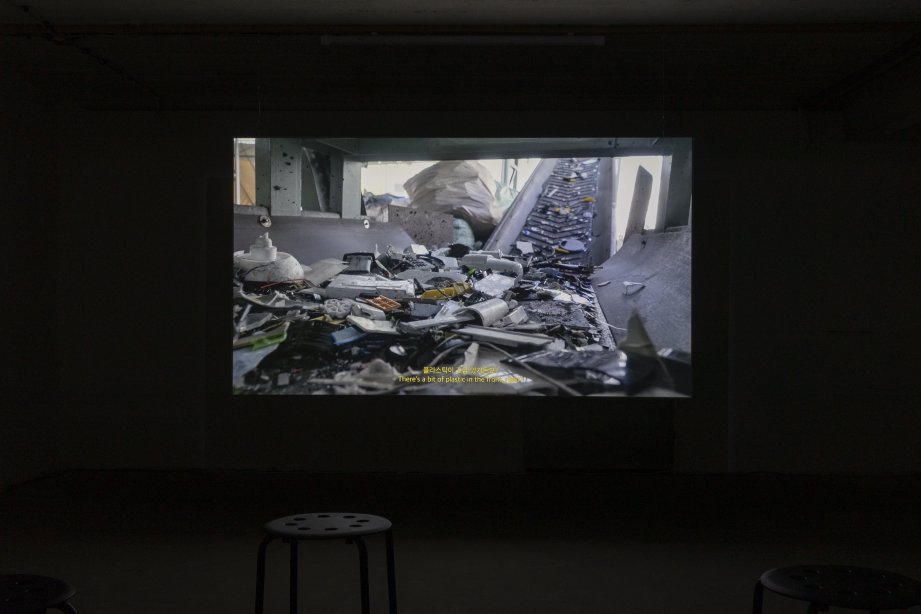 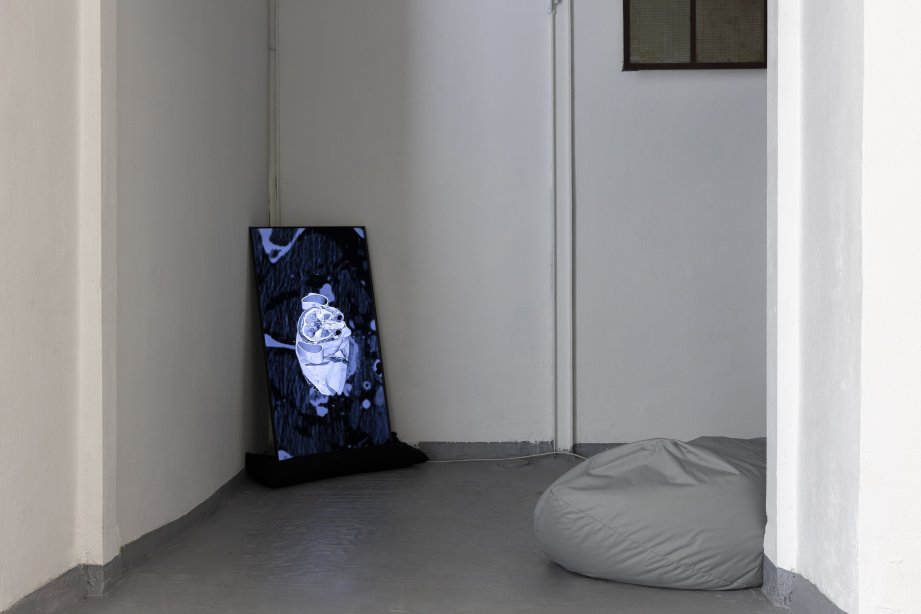 the exhibition was part of the three-month AIR_Frankfurt residency of Eunhee Lee and Gil Yefman at basis in collaboration with the MMCA Korea and Artport Tel Aviv. the artists used the basis project space as a field of experimentation for new and existing works.

The felted Zyklon B Label / DEGESCH has gone through the process of washing with soap water as a cleaning and erasing process. The text of the label was forgotten and only traces of history were left apparent. The IG Farben factory which produced Zyklon B and was the second home to Josef Mengele, was incorporated and turned into a pedagogic institution rebranded after Goethe.

In relation to one another - the yellow and red color constructing the Zyklon B label along with the blue drawings of the BUSTED series, complete the three prime colors which correspond to Goethe‘s theory of colors. In turn, the chalk drawings and felting methods are present in the heritage of Joseph Beuys and his inspiration by Rudolf Steiner, who was deeply influenced by Goethe.

The BUSTED series juxtaposes the two iconic figures of Goethe and Hitler in a „head to head“ incorporative debate, where erasing one‘s identity forms the ghostly manifestation of the other‘s. The two pop culture historical figures vary or even oppose one another, yet within the friction and heat of the lingering moment, they dissolve into each other‘s form, becoming more of the same. The process of deconstructing memory gives rise for a suppressed collective memory to reappear. Goethe in turn became redundant, deformed, and no longer recognized, turning into a blue and white phantom. Both figures are busted - as if they are glorified and condemned, depicted as criminals and heroes. Their shared status suggests a new „statue quo“.

Decomposition is an ongoing project using various mediums such as video, textile, drawing and felting, in order to transform traumatic imagery of mass graves from world war 2 into tactile, familiar and therapeutic artefacts.

Visual Artist Eunhee Lee explores the social relations between individuals, images and technologies, which addresses the ontological and ethical issues of human with the current techno- logical environment. Eunhee Lee creates narrative films that combines collected research and documented images. At the basis project space her videos HOT/ STUCK/DEAD, Machines don’t die, and Blood Can Be Very Bad will be on view.

Blood Can Be Very Bad is a black-and-white video essay questioning the relationship of image, body and our perception of materiality based on the artist’s personal story. The title refers to a mnemonic for a quick diagnosis of brain pathology with CT (compu- terized tomography) image. If one says human inner body is a concealed territory since it is impossible to see without invasion, CT image appears to be an opposite method which exposes the inside out through virtual computation. To the artist, the image is brutal as it determines a patience’s life and death solely through visual observation.

HOT/STUCK/DEAD shows the physical origins of the digital screen. Peering inside the machinery of displays, the artist traces the material that serves as a matrix for the typical images of psychedelic screens. Delving into the chemical principle underlying liquid crystals that exist interme- diately between liquid and solid phases, this work examines the process of its creation and obsolescence within the economic structure—the standards and finitude that are viewed as (ab) normal.

The work Machines don’t die approaches the relation between digital objects and machines in the material dimension. Data is often embodied in advanced digital devices with glistening surface, yet the hardware of the machines becomes ‘junk’ as soon as its functionality fades and eventually gets thrown away. The work traces such material remnants in the processes of handling the electronic waste and recycling value chain, in which the mineral and metal that once belonged to electronic devices are re-absorbed into the reproduction cycle.